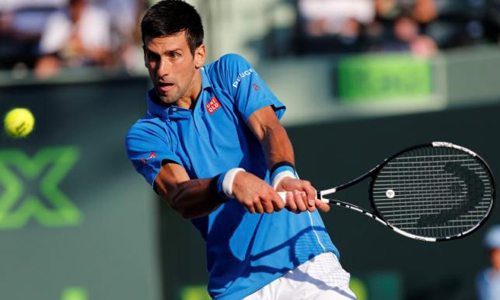 MIAMI - Defending champion Novak Djokovic defeated Belgium's Steve Darcis 6-0 7-5 on Monday to power into the last 16 of the Miami Open along with Japan's Kei Nishikori and Canada's Milos Raonic. The Serbian world number one, who just like last year won at Indian Wells before heading to South Florida, will face Alexandr Dolgopolov, a 7-5 6-4 winner over Brazilian Thomaz Bellucci, in the fourth round. Djokovic, who is seeking a fifth win at Miami, wrapped up a one-sided first set in 26 minutes but faced a sterner test in the second. Darcis broke to go ahead 5-4 but after the Serb leveled up the set, he broke back and held on to secure the match. Fourth-seed Nishikori had even less trouble as he crushed Serbia's Viktor Troicki 6-2 6-2 in 63 minutes. Troicki, who needed medical treatment to his left side during the match, struggled to cope with Nishikori throughout with the 25-year-old converting five of his six break points. "I was almost perfect on the court. It is so exciting that I am playing well here," said Nishikori. "Maybe he was hurting a little bit but I was still putting him under pressure with my return." Raonic also moved into the fourth round after a hard-earned 6-1 5-7 7-6 (3) win over French 31st seed Jeremy Chardy. Raonic was broken when serving for the match at 5-4 in the second and then Chardy went on to force the third set. "He started playing more freely and I sort of went the other way," said Raonic. "He played well in the second set and I think he played better than I did in the third." Belgian 18th seed David Goffin beat Poland's Jerzy Janowicz 6-4 6-3 while Spain's David Ferrer, the sixth seed, got past Czech Lukas Rosol 6-4 7-5. - REUTERS