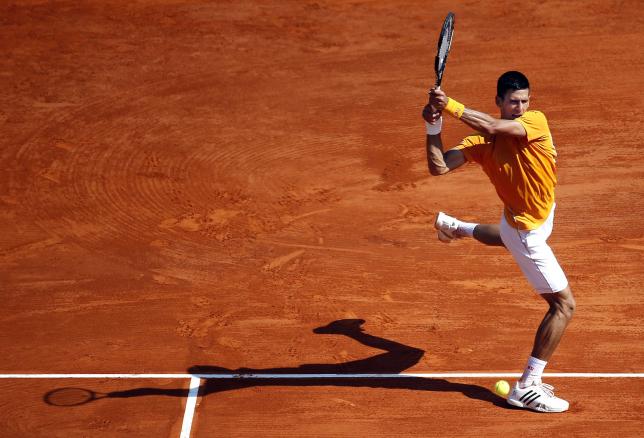 MONACO - World number one Novak Djokovic eased into the European claycourt season with a comfortable win over Spanish qualifier Albert Ramos-Vinolas at the Monte Carlo Masters on Tuesday. Clad in an orange shirt roughly the same colour as the scenic Centre Court overlooking the Mediterranean, the 2013 champion got straight down to business, winning 6-1 6-4. The 27-year-old Serb raced through the first five games before Ramos-Vinolas offered some resistance to provide a useful workout for the man hoping to complete a career grand slam at the French Open which starts next month. Under clear blue skies Djokovic, who won back-to-back hardcourt titles at Indian Wells and Miami, raised his level midway through the second set, following a short break to have the court watered, and strolled to victory. It was a good day for a clutch of seeded Frenchmen, with Gilles Simon, Jo-Wilfried Tsonga and Gael Monfils all making hay in the warm conditions. Simon beat Monaco's Benjamin Balleret 6-4 6-2 while 11th seed Tsonga was equally untroubled by Germany's Jan-Lennard Struff. Monfils was just pleased to come through a tough three-setter against Russian Andrey Kuznetsov without any physical problems after he hurt his hip at the Miami Masters and was forced to retire hurt against Tomas Berdych. "I was happy the way I moved a couple days ago. I was happy the way I moved today," Monfils, who won 4-6 6-3 6-4 told reporters. "I was very surprised. "Every year I lose those tight matches, 6 4 7 6, three sets, because when I come here I have no confidence and I'm more or less injured every time. "This year, I feel okay." Rafa Nadal, looking to regain some confidence at a tournament he won eight times in succession from 2005, begins his European claycourt season on Wednesday against French wildcard Lucas Pouille who ousted Austrian Dominic Thiem. Defending champion Stanislas Wawrinka is also in action on Wednesday, along with fellow Swiss Roger Federer. - Reuters