Djokovic too good for unseeded Sousa in Miami 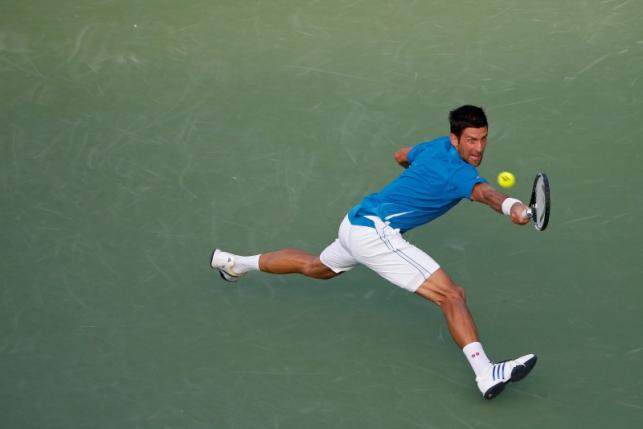 Djokovic too good for unseeded Sousa in Miami

MIAMI - Five-times champion Novak Djokovic overcame a first-set spill to beat unseeded Joao Sousa of Portugal 6-4 6-1 in the third round at the Miami Open in Florida. The world number one fell on his left side while hitting a forehand on the baseline and his shot went into the net to allow Sousa to pull even at 4-4. But Djokovic was not injured and he dusted himself off and won eight out of the next nine games in a 77-minute match. The Serb is vying to match Andre Agassi’s tournament record of six wins in Key Biscayne. "That first set came down to a few points," said Djokovic after improving to 24-1 in 2016. "After that, it was quite a good performance. In the second set I felt much more comfortable. I was serving very well the entire day. "I'm glad that I managed to finish the match the way I did. Obviously, it gives me confidence for the next one." Djokovic landed 86 percent of first serves in the second set and dropped only three points on serve. He will meet Dominic Thiem in the next round after the Austrian defeated Japanese qualifier Yoshihito Nishioka 6-2 6-2. Argentine lucky loser Horacio Zeballos, who received a second chance when Roger Federer withdrew because of a stomach virus, continued to make the most of his good fortune. He rebounded to beat Spain’s Fernando Verdasco 1-6 6-4 7-6(4). -Reuters