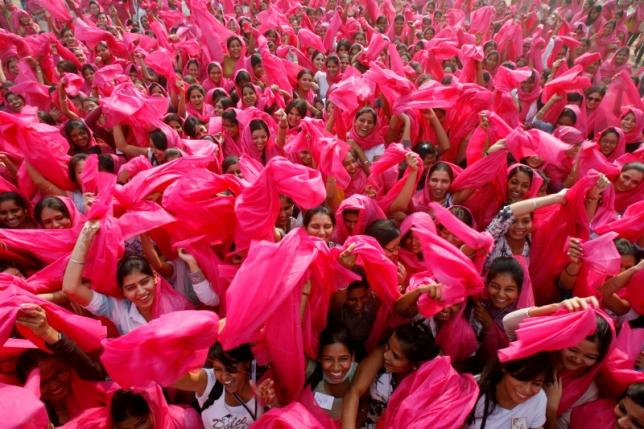 WASHINGTON - Doctors often disagree on whether women have breast cancer if they have abnormal cells that don’t look like invasive tumors under a microscope, a US study suggests. The researchers asked three different pathologists to give a second opinion on women's biopsy slides. When the slides showed either invasive breast cancer, or harmless or benign cells, the doctors agreed with the original diagnosis at least 97 percent of the time. But when the initial diagnosis was “atypia” – healthy cells that grow faster than normal – the pathologists thought doctors had originally overestimated the danger in more than half of cases. And they thought doctors had overestimated the danger for almost one in five women who were originally diagnosed with a common noninvasive malignancy of the breast known as ductal carcinoma in situ (DCIS). "It's easier for physicians to diagnose diseases at the extremes of the spectrum – we are good at diagnosing normal breast tissue and the very abnormal cells of invasive breast cancer," said lead study author Dr. Joann Elmore of the University of Washington School of Medicine and Harborview Medical Center in Seattle. "Between these extremes, agreement of pathologists deteriorates," Elmore added by email. Atypia and DCIS are gray areas on a spectrum of cancer severity between benign, or generally harmless, cells and fast-growing invasive tumors, said Dr. Richard Bleicher, breast clinical program leader at Fox Chase Cancer Center in Philadelphia. "It's sort of akin to trying to differentiate blue from teal from green – there is a bit of subjectivity," said Bleicher, who wasn't involved in the study. For the study, three different pathologists working independently reviewed one biopsy slide apiece from 240 women aged 50 to 59. Overall, they agreed with the original biopsy diagnosis about 92 percent of the time, Elmore and colleagues report in the Annals of Internal Medicine. They thought about five percent of the original diagnoses had overestimated the danger, and roughly 3 percent had underestimated the cancer risk. In the real world, pathologists might have consulted with colleagues or requested additional tissue samples if the diagnosis wasn’t clear from one slide, potentially increasing the accuracy of diagnoses and limiting the disagreement among doctors, the authors note. Still, the findings highlight the challenges doctors and patients face in deciding the best course of action when results don’t fall clearly into an extremely low-risk or high-risk category, Elmore said. Women with an abnormal mammogram may rush to get a biopsy, hoping for an immediate resolution and a clear diagnosis, Elmore noted. But when the biopsy results fall in a gray area, their path forward isn't always as clear cut as they would like. "I encourage women who receive an initial diagnosis of either atypia or DCIS to realize that they do not need to act immediately on the results; they have time to obtain a second opinion to verify the diagnosis," Elmore said. At the same time, women may find that even when doctors agree on the diagnosis, they may not agree on treatment, Dr. Alexander Borowsky, a researcher at the University of California, Davis, wrote in an editorial. When doctors overestimate the cancer risk, some women may suffer side effects from treatment that probably didn't lower their odds of dying from breast cancer, Bleicher noted. For example, some women with atypia or DCIS may be given tamoxifen, a drug to treat or prevent cancer that can also trigger early menopause. In the opposite circumstance, when doctors underestimate severity, women may miss an opportunity to get radiation or chemotherapy at an earlier stage of cancer when it may be more effective. "We have a critical need to validate the tools that diagnose disease, especially these categories in the gray area between normal and cancer," Elmore said. "Our results underscore persistent difficulties with medical diagnoses based on clinical judgment." -Reuters