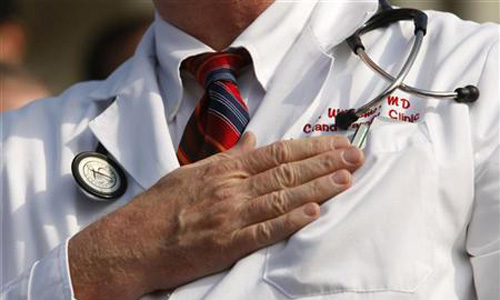 (Reuters) - Regardless of how they frame the discussion, doctors who deliver bad news may be seen as less compassionate by their patients, a new study suggests. Patients who watched videos of fictional interactions between doctors and patients felt the doctors delivering bad news were less compassionate than those giving good news, researchers found. Until recently, doctors and researchers believed that doctors who delivered bad news in an empathetic tone would be seen as sincere, said Dr. Eduardo Bruera, the study’s lead author from the University of Texas MD Anderson Cancer Center in Houston. But it seems the news itself has an impact on the way patients see doctors. The researchers showed 100 cancer patients two videos. In one, an actor playing a patient with advanced cancer was told by a doctor that treatment options had been exhausted. The other video showed the same scenario with a similar-looking doctor saying there may be some treatment options. On a scale of 0 to 50, with 50 being the least compassionate, patients gave the doctor with good news a score of 19, compared to 26 for the doctor with bad news. Fifty-seven patients said they preferred the doctor delivering the more optimistic message, while 22 preferred the doctor delivering the less optimistic news. “The patients consistently perceived the doctor who gave the more optimistic message as more compassionate,” Bruera said. He said the findings may help explain why doctors intuitively have a difficult time delivering bad news to their patients. “It’s unfortunate, but it’s the reality of life that when the doctor needs to give the patient bad news, the perception of that patient may be that of a less compassionate doctor,” Bruera said. There needs to be additional research into the findings, Dr. Teresa Gilewski of Memorial Sloan Kettering Cancer Center in New York City said in an editorial accompanying the new study in JAMA Oncology, online February 26. “For example, would the patient perception be different with an in-person interaction, a longer discussion, a personal relationship with the physician, or at a different time in the patient’s illness?” wrote Gilewski. The researchers say future research should account for the trust patients have with their doctors, too. Still, they also suggest researchers should craft techniques to help doctors deliver bad news without the content affecting the patients’ perceptions of their compassion.