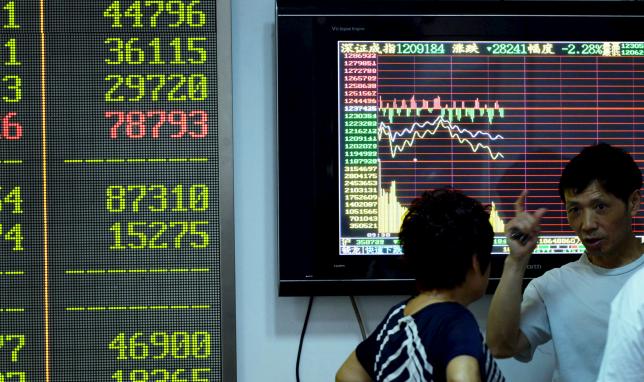 SYDNEY - Asian share markets were in a mixed mood on Wednesday as the mounting risks of a hike in U.S. interest rates as early as next month lifted the dollar and bond yields, pressuring currencies across the region. Moves were mostly minor with Japan's Nikkei up 0.2 percent and South Korea's KOSPI off 0.1 percent. MSCI's broadest index of Asia-Pacific shares outside Japan slipped 0.5 percent. In China, the CSI300 index of the largest listed companies in Shanghai and Shenzhen was flat after curbs on short-selling prompted a sizable bounce on Tuesday. There were also signs Chinese consumers could be taking over from manufacturers as the driving force for growth as the Caixin/Markit survey of services climbed to its highest in 11 months. Losses on Wall Street had been modest with the Dow ending Tuesday off 0.27 percent, while the S&P 500 eased 0.22 percent and the Nasdaq 0.19 percent. Leading the way were shares in Apple which hit their lowest in over six months, apparently in part on worries about demand in China. The latest scare over U.S rates came when Atlanta Federal Reserve President Dennis Lockhart told the Wall Street Journal that it would take "significant deterioration" in the economy for him to not support a hike in September. "Given that Lockhart is middle-of-the-road to slightly dovish, these comments from him really add a lot of weight to the notion that the Fed really wants to go in September," said analysts at Citi. Investors reacted by narrowing the odds of a move next month, though Fed fund futures <0#FF:> still imply only around a 50-50 chance of a hike so soon. Yields on two-year Treasury notes jumped 5 basis points to 0.74 percent, so reversing all the fall that followed a surprisingly soft report on U.S. wages out last week. The shift to higher rates in the United States has been sucking funds out of emerging markets, pressuring currencies from Brazil to Mexico to South Korea. The Malaysian ringgit was hit especially hard, striking lows not seen since 1998. The U.S. dollar also gained on its major counterparts, reaching 124.41 yen from a low of 123.77 on Tuesday. The euro recoiled to $1.0862, from a top of $1.0988. Against a basket of currencies, the dollar was up at 98.132 and threatening the July peaks around 98.151. In commodity markets, Brent oil added 26 cents to $50.25 a barrel and U.S. crude gained 20 cents to $45.94. -Reuters