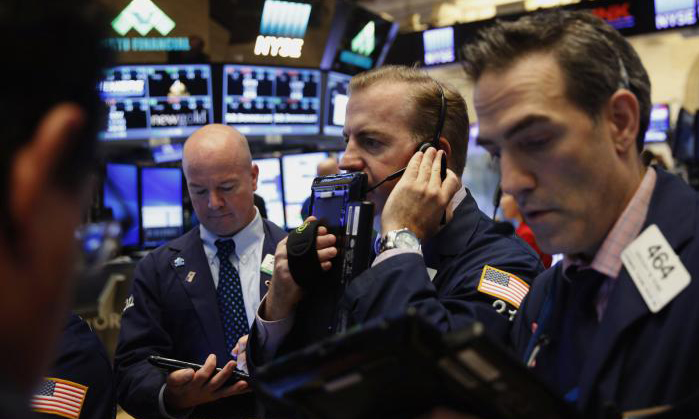 NEW YORK- The dollar rose to its highest since Feb. 3 against a basket of currencies on Friday as investors increased bets on higher U.S. interest rates, while a measure of world stocks looked set for its first weekly gain in four weeks despite some soft U.S. corporate results.
On Wall Street, energy and healthcare stocks weighed on the S&P 500 and Dow, but Microsoft at all-time highs kept the Nasdaq in positive territory. A potential merger between AT&T and Time Warner lifted the latter's shares to their highest in 15 years. GE (GE.N) dampened sentiment after the conglomerate cut its full-year revenue growth target and narrowed its profit forecast. GE's weak report came on the heels of lackluster results from heavyweights such as Verizon (VZ.N) and Travelers (TRV.N) this week. "If companies cannot beat estimates in this (low-rate) environment, it raises the question of what will happen when the Fed raises rates in December," said Adam Sarhan, chief executive at Sarhan Capital. The Dow Jones industrial average .DJI fell 26.29 points, or 0.14 percent, to 18,136.06, the S&P 500.SPX lost 2.25 points, or 0.11 percent, to 2,139.09 and the Nasdaq Composite .IXIC added 10.31 points, or 0.2 percent, to 5,252.14. MSCI's broadest index of Asia-Pacific shares outside Japan .MIAPJ0000PUS was down 0.4 percent and the pan-European STOXX 600 index closed a hair lower. World stocks, as measured by MSCI's world index .WORLD, were still on track for their first week of gains since September. In currencies, the euro EUR= hit a seven-month low against the dollar of $1.0858 following the European Central Bank's decision to leave its ultra-loose policy unchanged on Thursday, keeping the door open to more stimulus in December. The dollar .DXY also was bolstered by comments from New York Federal Reserve President William Dudley earlier this week that the Fed was prepared to raise U.S. overnight interest rates, and by decreasing likelihood of Donald Trump winning the U.S. presidency. “There have been some Fed comments where they sound like they are ready to move in December, but also partly related is the market view that a hike in December is much more likely if Clinton wins,” said Steven Englander, global head of foreign exchange strategy at Citigroup in New York. Traders are now pricing in a 70-percent chance the Fed will raise rates in December, up from 64 percent two weeks ago, according to CME Group’s FedWatch Tool. China's offshore yuan CNH=D3 fell to its lowest against the dollar in six years, pressuring the currencies and equity shares of emerging market countries that rely on exporting to the world's second largest economy. MSCI's emerging markets index .MSCIEF fell 0.4 percent. Longer-dated U.S. Treasury yields edged down modestly in step with their European counterparts, pushing both yield curves to their flattest level in a week, in the wake of Draghi's comments about bond purchases. "Draghi basically told people they could play in the long end," said Tom di Galoma, managing director at Seaport Global Holdings in New York. Oil prices edged up but were set for their first weekly loss since mid-September. Brent crude futures LCOc1 rose 0.7 percent while U.S. WTI crude futures CLc1 gained 0.3 percent. -Reuters