Dollar hovers near three-week high, euro gets respite after fall 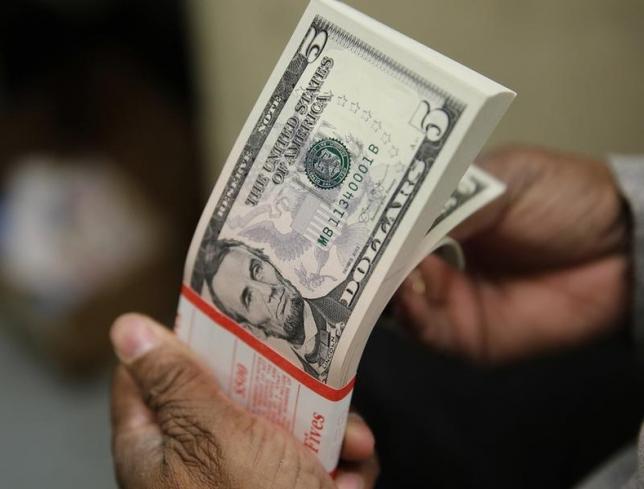 Dollar hovers near three-week high, euro gets respite after fall

SYDNEY/SINGAPORE - The dollar hovered near a three-week high against a basket of major currencieson Friday, supported by a rise in US bond yields, while the euro gained a bit of respite after a recent selloff. The euro edged up 0.2 percent to $1.0679 EUR=, having fallen as far as $1.0637 on Thursday, its lowest level since March 19. For the week, the euro is down about 2.7 percent. "It's hard to avoid the conclusion that carry trades are playing a part. Note that German bond yields out to 8 years are now in negative territory, the euro is very much a funding currency," said David de Garis, senior economist at NAB. Against the higher-yielding Australian dollar, the euro was down about 3.6 percent EURAUD=R so far this week. Sterling held steady at $1.4714 GBP=D4. The pound had fallen more than 1 percent on Thursday after data showed Britain's trade deficit widened more than expected. The figures suggested the strong pace of economic recovery could cool slightly, weighing on a market already fretting about the outcome of a May 7 national election. Against the yen, the dollar eased 0.1 percent to 120.51 yen JPY=. The dollar seems to have some solid support at levels near Thursday's intraday low of 119.86 yen, said Stephen Innes, senior trader for FX broker Oanda in Singapore. "My feeling is we've established this really strong base down here at 119.80," Innes said, adding that there seemed to be some strong short-term dollar buying interest near that level. The dollar index last stood at 98.888 .DXY, not very far from Thursday's high of 99.181, its highest level since March 19. Analysts said the greenback was supported after US bond yields rose on Thursday, helped by a smaller-than-expected rise in weekly jobless claims that soothed some worries about US jobs growth. The US 10-year Treasury yield last stood at 1.954 percent US10YT=RR, up from Thursday's intraday low of 1.876 percent. AUSTRALIAN DOLLAR The Australian dollar has risen against both the euro and the US dollar this week, partly due to the Reserve Bank of Australia's decision on Tuesday not to cut interest rates, an outcome that prompted a squeeze in short Aussie positions. The Aussie last traded at $0.7698 AUD=D4. For the week it was up about 0.9 percent. However, several attempts on Thursday to break above $0.7740 had ended in failure, suggesting the market is wary of getting too carried away. Indeed, debt markets imply a near three-in-four chance that the RBA will cut interest rates next month and analysts appear to be getting more dovish by the week. "We continue to expect a 25bp cut in May and are now adding two more cuts to our RBA profile taking cash to a new low of 1.5 percent by end 2016," said Su-Lin Ong, head of Australian and New Zealand FIC Strategy. "Our rationale is threefold: further weakness in key commodity prices/terms of trade, a weaker capex outlook coupled with faltering business confidence, and a sticky currency." - Reuters