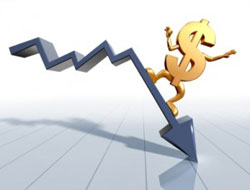 WASHINGTON - The dollar was giving ground in Asia on Thursday as investors priced in a later start and a slower pace for future US rate rises, slashing bond yields globally and firing up stocks.

The formerly friendless euro found itself up at $1.0880 , having jumped 2.8 percent on Wednesday, while oil held gains of 5 percent as the dollar retreat benefited commodities.

The only laggard was the Nikkei which slipped 1.1 percent in reaction to a rising yen.

Short-term US yields had boasted their biggest drop in six years after the Federal Reserve trimmed forecasts for inflation and growth, and said unemployment could fall further than first thought without risking a spike in inflation.

The median projection for the Fed funds rate at the end of 2015 was cut to 0.625 percent, down half a point from December.

Fed Chair Janet Yellen also sounded uncomfortable with the strength of the dollar, saying it would be a "notable drag" on exports and a downward force on inflation.

"There was nothing in the statement to suggest that the Fed is leaning toward a June hike," said Michelle Girard, chief US economist at RBS.

"Developments leave us feeling more comfortable with our official call for the first rate hike being in September."

The market reaction was immediate and violent. Fed fund futures <0#FF:> surged as investors sharply scaled back expectations for how fast and far rates might rise.

The drop in yields pulled the rug out from under the dollar, as investors have been massively long of the currency in the expectation its interest rate advantage could only get wider.

Against a basket of currencies the dollar was down a further 0.3 percent, having shed 1.8 percent on Wednesday.

The Swiss franc, sterling and the Australian dollar all enjoyed similar gains, while the New Zealand dollar got an extra boost from upbeat growth data.

Wall Street was encouraged by the prospect that policy would stay super-loose for longer and the Dow ended Wednesday up 1.27 percent. The S&P 500 rose 1.21 percent and the Nasdaq 0.92 percent.