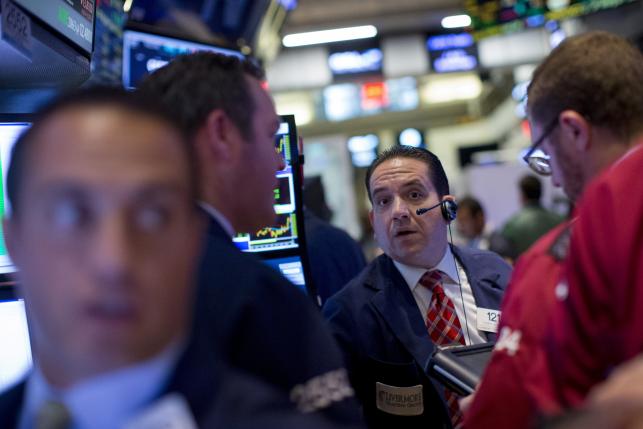 NEW YORK – World equity markets and the dollar advanced on Friday to end a rocky week on an upbeat note after Federal Reserve Chair Janet Yellen said the Fed was on track to raise interest rates this year, and as U.S. economic growth was revised upward again. Stocks on Wall Street initially jumped following an almost 3-percent surge in Europe, after a report showed the U.S. economy grew more than previously estimated in the second quarter, propelled by consumer spending and construction - the second upward revision in a row. Gross domestic product grew at a 3.9 percent annual clip, up from a 3.7 percent estimate in August, the Commerce Department said. Yellen said Thursday that she and other Fed policymakers do not expect recent economic and financial market turmoil to significantly alter the central bank's policy, easing concerns about the world's economic health. There is much to like about the U.S. economy in the second half of the year, despite "all the global malaise," said Jacob Oubina, senior economist at RBC Capital Markets in New York. "What the market latched on to with Yellen's speech on Thursday is that she's in the 2015 camp for a rate hike. If the domestic economy holds in there, they are going to hike in December," Oubina said. The dollar rose 0.30 percent to $1.1195 against the euro EUR= and 0.44 percent to 120.59 against the yen JPY=. The dollar index .DXY rose 0.25 percent. MSCI's all-country world index .MIWD00000PUS pared gains after Wall Street turned mixed. Earlier in Asia, some markets were in the red after data showed Japan slipping back into deflation. An afternoon slide in biotech stocks, however, pulled the Nasdaq down and the S&P 500 to trade slightly below break-even. The Dow Jones industrial average .DJI rose 84.49 points, or 0.52 percent, to 16,285.81. The S&P 500 .SPX fell 2.76 points, or 0.14 percent, to 1,929.48 and the Nasdaq Composite .IXIC lost 50.74 points, or 1.07 percent, to 4,683.74. European shares rallied after testing 2015 lows in the previous session as concerns eased over how the global economy may be impacted by a slowdown in world No. 2 economy,China. Still, that surge was not enough to prevent a decline on the week. The pan-European FTSEurofirst 300 index .FTEU3 closed up 2.78 percent, while the euro zone's blue-chip Euro STOXX 50 index .STOXX50E finished 3.11 percent higher. For the week, the FTSEurofirst fell. 1.6 percent and the Euro STOXX 50 slid 1.4 percent. Some investors said they were bullish on the longer-term outlook for European equities, given improving economic data and stimulus measures from the European Central Bank. "Our six-to-12 month view is that this is another mid-cycle sort of correction that really began last year," said Mike Wilson, chief investment officer at Morgan Stanley Wealth Management. The stock market is rebalancing, with manufacturing and the industrial part of the economy very weak, while services and the consumer part is extremely good globally, he said. The yield on the U.S. 10-year Treasury note US10YT=RR rose 12/32 in price to yield 2.1623 percent, while gold fell from one-month highs after Yellen's speech and on the strong dollar. Ten-year German Bund yields DE10YT=TWEB rose 6.5 basis points to 0.65 percent, having hit one-month lows on Thursday before Yellen spoke. Gold futures for December delivery GCcv1 settled down 0.71 percent at $1,145.60 an ounce. Oil rose on the stock market gains and a lower U.S. rig count, though the decline in oil drilling was the smallest in four weeks and not particularly exciting to oil bulls. Brent LCOc1, the global benchmark, rose 43 cents to settle at $48.60 a barrel. U.S. crude CLc1 gained 79 cents to settle at $45.70. –Reuters