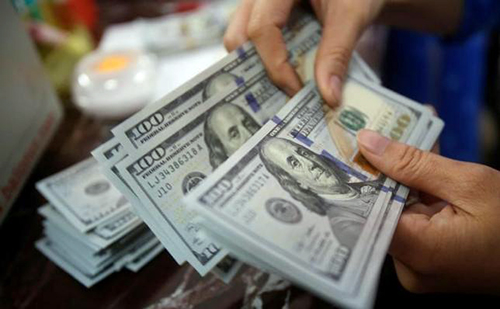 NEW YORK – Weak US economic growth data knocked down the dollar and yields on US government debt Friday, while Japanese government bond yields rose the most in eight years after investors reacted coolly to the Bank of Japan's latest effort to boost the economy. The US economy grew far less than expected in the second quarter as inventory investment fell for the first time in nearly five years. But a surge in consumer spending suggested underlying strength and provided a silver lining for investors. The BOJ doubled its purchases of exchange-traded funds, yielding to pressure from the government and financial markets for bolder action. The move nevertheless disappointed investors who sought more audacious measures. The yen jumped 3.05 percent against the dollar, whose decline put the trade-weighted dollar exchange rate on course for its biggest weekly fall in two months. The dollar index .DXY fell 1.22 percent to 95.569. Japan's 10-year bond yield JP10YT=RR soared 10 basis points to -0.17 percent, on course for its biggest one-day rise since April 2008. World equity markets were mostly higher, with the US benchmark S&P 500 index hitting a record intraday high for the seventh time in July. A surge in Alphabet (GOOGL.O) and Amazon.com (AMZN.O) lifted the Nasdaq following strong results after the bell on Thursday and helped the benchmark S&P 500 to rebound. But disappointing results from oil super-heavyweights Exxon Mobil (XOM.N) and Chevron (CVX.N) weighed on the Dow. Alphabet shares closed up 3.33 percent and Amazon rose 0.88 percent, while Exxon fell 1.39 percent. Chevron rebounded 0.68 percent. The Dow Jones industrial average .DJI closed down 24.11 points, or 0.13 percent, to 18,432.24. The S&P 500 .SPX rose 3.54 points, or 0.16 percent, to 2,173.6 and the Nasdaq Composite .IXIC added 7.15 points, or 0.14 percent, to 5,162.13. Stocks in Japan absorbed the BOJ's decision a little more easily, in part because the central bank increased purchases of exchange-traded funds (ETFs) in its easing package. Japan's Nikkei rose. European indices gained on better-than-expected results from Barclays (BARC.L) and UBS (UBSG.S), among others. In Europe, the FTSEurofirst 300 .FTEU3 index of pan-regional stocks closed up 0.68 percent at 1,347.43. Yields on the benchmark US Treasury note US10YT=RR pushed below 1.5 percent on the GDP data, with its price rising 16/32 and the yield falling to 1.4565 percent. Gold hit a near three-week high on the US GDP data, which is seen keeping a Federal Reserve decision on when to raise interest rates on hold. US gold GCcv1 for Aug. 6 delivery settled 1.3 percent higher at $1,349.00 an ounce. "Gold has been signaling, before Brexit, central banks are running out of options to help stimulate the economy," said Quincy Krosby, market strategist at Prudential Financial, referring to the British vote in June to leave the European Union. Oil prices steadied amid short-covering after a week-long selloff and ended the month about 15 percent lower on persistent glut concerns, with the biggest decline seen for U.S. crude in a year. Brent crude oil futures LCOc1 settled down 24 cents to $42.46 per barrel. U.S. West Texas Intermediate (WTI) crude CLc1 rose 46 cents to settle at $41.60 a barrel. –REUTERS