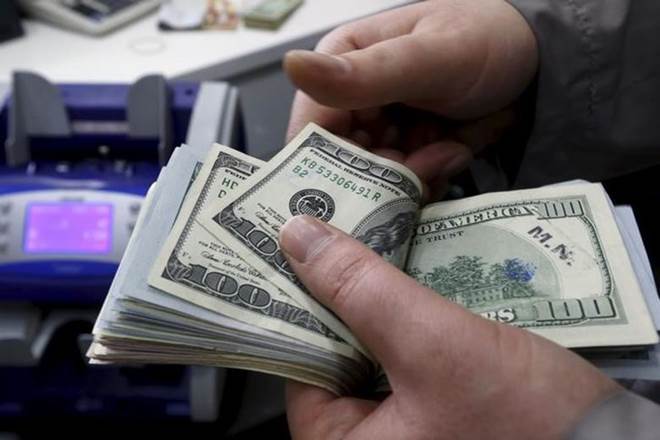 NEW YORK (Reuters) - The US dollar rose more than a penny against a basket of major currencies as the euro cratered, and US stocks closed higher , as the European Central Bank signaled interest rate hikes were a long way off. The bank’s unexpectedly dovish decision overshadowed its statement that it aimed to wrap up its crisis-era stimulus program at the end of this year. The ECB now plans to reduce monthly asset purchases between October and December to 15 billion euros until the end of 2018 and then conclude the program. Investors, though, seized on comments indicating that interest rates would stay at record lows at least through the summer of 2019, and some analysts believed it may be longer, with ECB President Mario Draghi’s term due to expire at the end of October 2019. The US Federal Reserve on Wednesday decided to raise rates by a quarter of a percentage point, creating “a widening rate differential between the US and Europe, and the dollar is the beneficiary,” said Ed Egilinsky, head of alternative investments at Direxion in New York. The euro  marked its steepest one-day drop against the US dollar since June 2016, and was down 1.75 percent at $1.1583. The dollar index .DXY, which measures the greenback against six other top currencies, rose 1.17 percent. Ten-year government bond yields in Germany, the euro zone benchmark, fell around 6 basis points to 0.422 percent compared with Wednesday’s close DE10YT=RR. Oil markets, pressured by the strengthening dollar and fears that OPEC countries could decide to increase output at a meeting next week, ended mixed. West Texas Intermediate (WTI) crude oil futures CLc1 settled at $66.89 per barrel, up 0.38 percent, while Brent LCOc1 went the other way, settling down more than 1 percent at $75.94. “The independent show of WTI strength is merely a catchup process to the higher priced products and Brent values,” Jim Ritterbusch, president of Ritterbusch and Associates, said in a note.

As the Fed and the ECB provided much of the week’s central bank fireworks, the Bank of Japan began a two-day policy meeting, though virtually no one was forecasting changes to its stimulative policy given recent signs of slowing growth. Another issue that will keep investors in check is concern about US threats to impose tariffs on $50 billion of Chinese goods. US President Donald Trump was planning to meet with trade advisers to decide whether to activate the tariffs.. CBOT corn and soybean futures tumbled as uncertainty about tariffs and favorable crop weather in the US Midwest prompted funds to liquidate big long positions. CBOT July corn 1CN8 fell to its lowest since mid-January, and front-month soybeans Sc1 dipped to a 9-1/2-month low. In a rare merging of the sports and trading worlds, markets are gearing up for soccer’s World Cup in Russia, where time zone differences mean more matches during European, US and Latin American trading hours than any previous tournament. A study done during the last World Cup with similarly timed games, the 2010 finals in South Africa, showed trading volumes on share markets dropped by a third on average when matches were on and 55 percent when a market’s own team played.