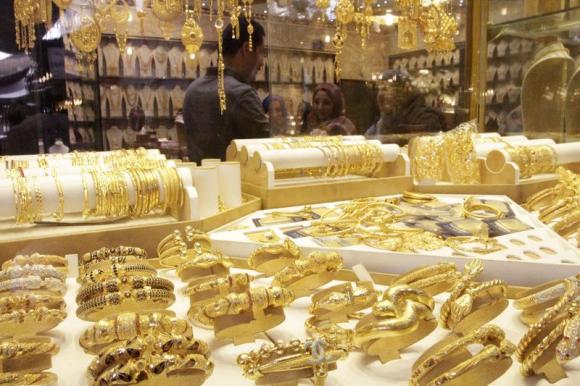 SINGAPORE - Gold languished near a three-month low on Thursday as the metal tumbled for a ninth straight session, hammered by a strong dollar and increasing expectations of a near-term interest rate rise in the United States. Spot gold slipped 0.2 percent to $1,151.85 an ounce by 0342 GMT after touching $1,147.10 on Wednesday, the lowest since Dec. 1. Bullion has taken a big hit since Friday, when strong U.S. nonfarm payrolls data stoked expectations the Federal Reserve would end its near-zero rate policy soon. The dollar stood tall, boosted by diverging global monetary policies that sent the greenback to its highest since April 2003 against a basket of six major currencies. Investors believe higher U.S. rates could dent demand for assets that don't pay interest such as gold. A stronger dollar also dents bullion's safe-haven appeal. "The dollar strength is really blowing everyone out of the water," said a Hong Kong-based precious metals trader, adding that demand for physical bullion was not strong enough to support prices. "It is really tough after the jobs data to get bullish on gold. Equities have given back a little bit but the money is going into other instruments offering better yields," he said. Some Fed officials have hinted that the Fed might act soon on rates. Markets are expecting an increase in June. Richard Fisher, president of the Dallas Federal Reserve Bank, said this week the U.S. central bank should promptly end its easy monetary policy and press ahead with a rate rise, followed by a set of gradual moves higher. Bullion wasn't getting much support from weaker equity markets as the combination of a robust dollar, weak technicals and bearish investor positioning took its toll. Chartists say gold prices are bound to go lower. Reuters technical analyst Wang Tao said gold could revisit its November 2014 low of $1,131.85, as it has broken support at $1,156. With the nine-day losing streak, gold has erased all of its gains from early 2015 and is showing a loss of nearly 3 percent for the year. Investors have been pulling out of bullion, given the bullish outlook for the dollar. SPDR Gold Trust, the world's top gold-backed exchange-traded fund, saw its holdings drop to the lowest in over a month earlier this week. Tracking gold, other precious metals have also headed lower. Platinum was trading near its lowest since 2009, while silver hovered near a three-month low. - Reuters