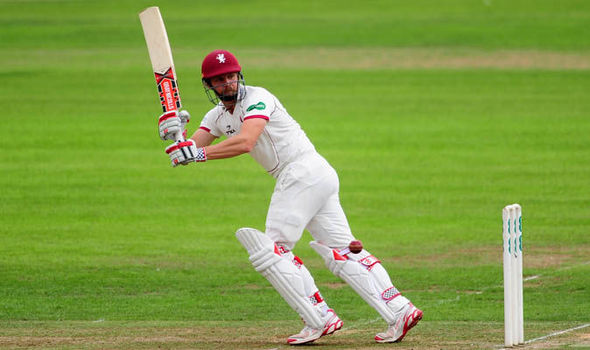 SOUTHAMPTON - Somerset boosted their hopes of a first ever English County Championship as they closed in on title rivals Middlesex and Yorkshire on another day of fluctuating fortunes in the final round of matches. After eking out a fourth batting point, thanks to a last-wicket partnership of 43, they dismissed relegated Nottinghamshire for 138 to gain ground on the two sides who had been above them when the games started. Dominic Bess, whose first-innings 41 had helped Somerset pass the key 350 mark, took five wickets as his team claimed seven of the eight bonus points available, and after declining to enforce the follow-on, ended the second day on 105 for two -- a lead of 332. With a Somerset win looking likely, only victory would be good enough for leaders Middlesex or their opponents at Lord's, Yorkshire. Middlesex, who are seeking their first championship in 23 years, earned a second batting point before being bowled out for 270. Then they tore through Yorkshire's top order before Tim Bresnan and Andy Hodd staged a fightback with a century stand for the fifth wicket. England all-rounder Bresnan and wicketkeeper Hodd both scored half-centuries as Yorkshire ended the day on 235 for six, needing not only to beat Middlesex, but to score at least 350 in their first innings, to be sure of a third successive title. With two days to go, Middlesex have 217 points, Somerset 210 and Yorkshire 208, with 16 more available for a win and five for a draw. The battle to avoid relegation from Division One is equally dramatic. With Nottinghamshire already down, Hampshire, currently in the second relegation slot, need to win to have any chance of staying up. They earned maximum batting points after scoring 411 all out against Durham at Southampton and then took three early wickets. But half-centuries from Graham Clark, Ben Stokes and Michael Richardson stalled Hampshire's progress, Durham finishing on 242 for seven, in sight of forcing the home side to bat again. The other two teams in danger, Warwickshire and Lancashire, are playing each other at Edgbaston. But after bowling Warwickshire out for 219, the visitors could muster only 152 to trail on first innings by 67 runs, leaving them looking favourites for the drop. When rain forced an early close to day two, Warwickshire had scored 12 without loss in their second innings. -Reuters