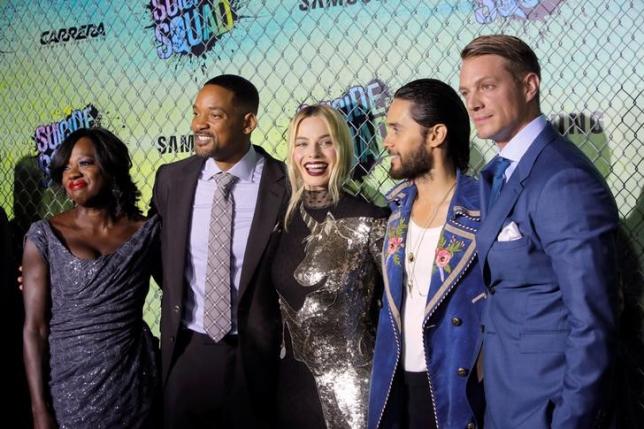 LOS ANGELES - The second weekend of horror-thriller "Don't Breathe" is showing plenty of life at an otherwise quiet Labor Day box office with an estimated $19.4 million at 3,051 North American locations for the four days. Warner Bros. fifth weekend of "Suicide Squad" showed impressive staying power in second place with about $13.6 million for the weekend -- enough for the supervillain tentpole to top the $300 million mark on Monday. But the holiday proved tough for two new entries into the market. Disney's "The Light Between Oceans" was heading for a modest sixth-place finish with $6.1 million at 1,500 sites and Fox's sci-fi thriller "Morgan" was nearly invisible with $2.4 million at 2,020, leaving it in 18th place. Cast members (L-R) Viola Davis, Will Smith, Margot Robbie, Jared Leto and Joel Kinnaman attend the world premiere of ''Suicide Squad'' in Manhattan, New York, U.S., August 1, 2016. REUTERS/Andrew Kelly Monday will also mark the final day for summer box office with the last year's $4.48 billion, according to comScore. That would be about even with last summer's total but 5.5% behind the 2013 record of $4.75 billion. The Labor Day frame is performing better than last year's, when Sony's second weekend of "The War Room" won with $13.3 million over the four days. "Don't Breathe" will hit nearly $55 million in its first 11 days and is already in profit for Sony, thanks its price tag of less than $10 million. The tale of a home-invasion burglary gone bad is the latest in a long line of strong performers in the horror category this summer, including two New Line entries -- "The Conjuring 2" and "Lights Out" -- Universals' "The Purge: Election Year" and Sony's "The Shallows." "Suicide Squad" declined by only 18% during the Friday-Sunday period and has become the eighth title to top the $300 million mark this year. Disney's fourth weekend of fantasy-adventure "Pete's Dragon" was leading the rest of the pack with an estimated $8.9 million for the four days, edging Focus Features' third frame of animated drama "Kubo and the Two Strings" with $8.7 million. Sony's fourth weekend of "Sausage Party" is following in fifth with $6.7 million for a total of nearly $90 million. Disney's launch of period drama "Oceans" premiered Thursday in competition at the Venice Film Festival. Starring Michael Fassbender, Alicia Vikander and Rachel Weisz, the film is the final DreamWorks title being distributed by Disney through its Touchstone label with future DreamWorks movie going out through Universal. "The Light Between Oceans," which carries a $20 million production budget, is directed by Derek Cianfrance from his own script based on the M.L. Stedman novel. "Morgan," directed by Luke Scott, centers on an intelligent robot -- played by Anya Taylor-Joy -- who attacks one of her creators. The ensemble cast includes Kate Mara, Toby Jones, Rose Leslie, Boyd Holbrook, Michelle Yeoh, Jennifer Jason Leigh and Paul Giamatti. "Morgan" is a low-risk proposition for Fox with a skimpy $6 million budget. Scott is the son of Ridley Scott and has been a second-unit director on two of his father's recent movies -- "The Martian" and "Exodus: Gods and Kings." -Reuters