Doping crackdowns a step in the right direction: Felix 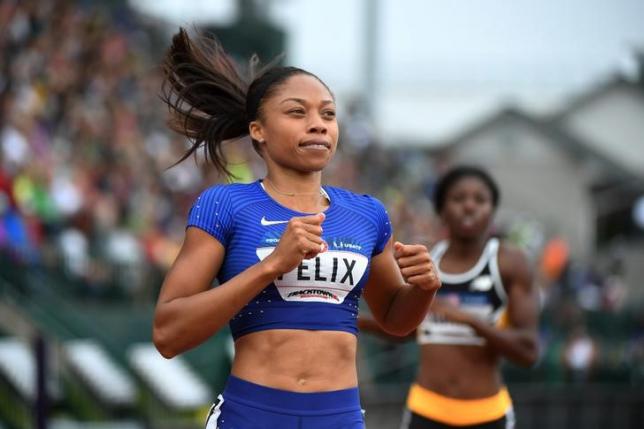 Doping crackdowns a step in the right direction: Felix

EUGENE - The crackdown on athletes caught up in recent doping scandals is a step in the right direction for the sport, Allyson Felix says, but the American sprinter is still worried it will not be a level playing field at next month's Rio Olympics. The 30-year-old qualified for her fourth Olympics earlier this month but will not be gunning for a 200-400 metres double after finishing fourth over the shorter distance at the U.S. trials in Oregon. Athletics has been under the spotlight due to a doping scandal that saw Russia banned from competing in the sport at the Rio Games after a World Anti-Doping Agency report uncovered ststematic abuse in the country. Kenya's team were also in danger of missing Rio before their government passed legislation that complied with anti-doping codes. "The number of scandals we see now just shows the real issues that are there in sports," Felix told reporters in Beverley Hills. "I would say that my confidence isn't high to think that there are not real issues. "I would hope that the playing field is more level (but) it is very hard to deal with as a clean athlete. "You are going to the biggest race of your life and you hope that is a clean race. But can you say that you are a 100 percent that you are sure? "I don't think that you can say that." Felix said athletics was working hard to clean up the sport. "It is hard ... but I hope we are moving in the right direction," she added. "I think that exposing athletes that are happening now is I think is a step in the right direction." Felix, who won the 200 at the London Games in 2012, had been attempting to do a 200-400 double at Rio but battled an ankle injury in the leadup to the trials in Oregon. The injury had affected her conditioning and she failed to qualify for the 200 by 0.01 seconds. "I think that what happened to me was just unfortunate. I think injuries are a part of sport and it is something that you just have to deal with," she added. "For me I feel so grateful to have made this team at all as two months ago I was not walking at all. "So it's pretty amazing to me that I'm still going to Rio and while it doesn't look exactly how I hoped it would. But I'm still going after it with everything I have." -Reuters