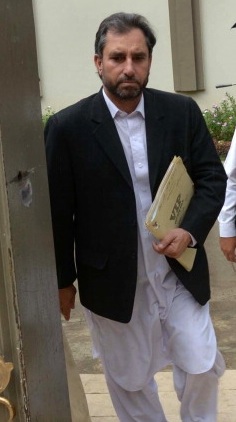 PESHAWAR (92 News) - Dr Shakil Afridi’s lawyer Samiullah Afridi was shot dead in Peshawar on Tuesday, 92 News reported. According to police sources, unidentified assailants fired at Samiullah’s car in Aslam Dheri locality in Mithra area of Peshawar. Samiullah fled to Dubai in December 2014 after receiving threats from militants. After returning to Pakistan, he was heading to his hometown when unknown armed men targeted him. Police after registering a case against unknown assailants, have started an investigation. Samiullah was the counsel for Shakeel Afridi, who helped the United States locate Al Qaeda chief Osama bin Laden, was jailed for 33 years in May 2012 after convicted of ties to militants.