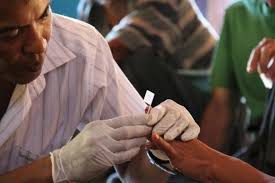 LONDON (Reuters) - Malaria with total resistance to the antimalarial drug artemisinin has taken hold in Myanmar and spread close to the border with India, threatening to repeat history and render crucial medicines useless, scientists said on Friday. If the spread of artemisinin-resistant malaria parasites were to reach into India, they said, that would pose a serious threat to the chances of global control and eradication of the killer mosquito-borne disease. And if resistance spreads from Asia to Africa, or emerges in Africa independently -- as has been seen before with previously effective but now powerless antimalarials, "millions of lives will be at risk", they said in a report. "Myanmar is considered the front line in the battle against artemisinin resistance as it forms a gateway for resistance to spread to the rest of the world," said Charles Woodrow of the Mahidol-Oxford tropical medicine research unit, who led the study at Oxford University. In a study published in The Lancet Infectious Diseases journal, Woodrow's team collected 940 parasite samples at 55 malaria treatment centres across Myanmar and its border regions. They found that almost 40 percent of the samples had mutations in their so-called kelch gene, K13 -- a known genetic signal of artemisinin drug resistance. They also confirmed resistant parasites in Homalin, in the Sagaing Region, only 25 km (15 miles) from the Indian border. While there have been significant reductions in the numbers of people falling ill and dying from malaria, it still kills around 600,000 a year -- most of them children in the poorest parts of sub-Saharan Africa. From the late 1950s to the 1970s, chloroquine-resistant malaria spread across Asia to Africa, leading to a resurgence of cases and millions of deaths. Chloroquine was replaced by sulphadoxine-pyrimethamine (SP), but resistance to SP subsequently emerged in western Cambodia and again spread to Africa. SP was replaced by artemisinin combination treatment, or ACT, and experts now worry that history may repeat itself yet again. "The pace at which artemisinin resistance is spreading or emerging is alarming," said Philippe Guerin, director of the Worldwide Antimalarial Resistance Network. Woodrow noted that thanks to advances in the science of genetic analysis, researchers tracking artemisinin antimalarials are in "the unusual position of having molecular markers for resistance before resistance has spread globally". "The more we understand about the current situation... the better prepared we are to adapt and implement strategies to overcome the spread of further drug resistance," he said.