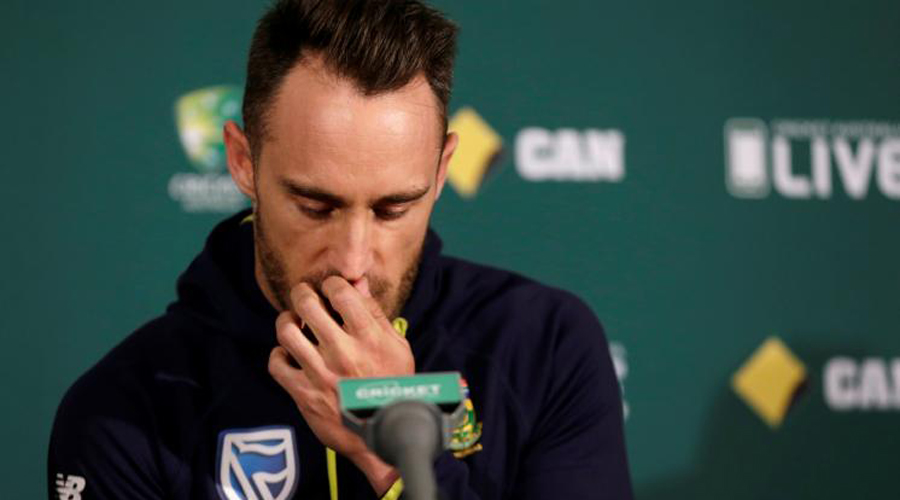 ADELAIDE - South Africa captain Faf du Plessis said on Wednesday he had been made a 'scapegoat' by the International Cricket Council and denied any wrongdoing after being found guilty of ball-tampering during the second test against Australia. Du Plessis, who was sanctioned for the same offence in 2013, was charged last week after footage emerged from the Hobart test of him applying saliva to the ball with a mint in his mouth. Cricketers in the field are permitted to, and routinely do, 'shine' one side of the ball by applying saliva with their fingers and rubbing it on their uniforms to encourage the ball to swing in the air when it is bowled. However, it is forbidden to use 'artificial' substances to work on the ball. After a marathon ICC hearing in Adelaide on Tuesday, the 32-year-old was fined his entire match fee but cleared to play in the series finale in Adelaide. The ICC verdict was defended by its South African Chief Executive David Richardson as a "line in the sand" but current and former players slammed the decision, saying every team shined the ball in the same way. Du Plessis, standing in for injured regular skipper AB de Villiers, expressed regret that the case had taken away from his team's series-winning triumph in Australia and said he had never intended to cheat. "I still completely disagree with (the verdict)," Du Plessis told a media conference in Adelaide in calm and measured tones. "I felt like I've done nothing wrong. "It's not like I was trying to cheat or anything, I was shining the ball. "It's something that all cricketers do. "Our mouths are always full of sugar, I think it's such a grey area in the laws of cricket. "I just ask for that everyone gets treated the same way. I think that's fair. "Obviously the ICC has taken a stance against me, to use me probably as a scapegoat now, but all you can ask for is that everyone gets treated the same." BIG DEBATE Sitting beside Du Plessis, Cricket South Africa Chief Executive Haroon Lorgat said he had asked the skipper to hold off from appealing the charge pending further information from the ICC. "We will pick up this topic with the ICC," Lorgat, a former chief executive of the sport's global governing body, said. "It's a big academic debate about this. "I am personally aware of the pervasiveness of this issue. I get stories told all the time." South Africa wrapped up the series 2-0 by thrashing Australia by an innings and 80 runs in Hobart last week, with the touring side's bowlers dominating. "I suppose the thing that's most disappointed us is that we've dominated and played exceptionally well," said Du Plessis. "That's taken all the shine away from that, excuse the pun," he added, breaking into a wry smile as reporters chuckled. Du Plessis was backed by Australia captain Steve Smith, who denied his team had ever complained about the tactic. "I've seen Faf's comments in his press conference ... We along with every other team around the world shine the ball in the same way," Smith told reporters. The charge laid by Richardson last week angered the South African camp, as did the close attention from local journalists, one of whom clashed with a team security guard at Adelaide Airport after the Proteas touched down on Monday. "Thanks for all the love last week," Du Plessis said with irony to reporters. "What happened at the airport was pretty disappointing ... Because I was never really going to be able to give any answers (before the hearing). "I did feel there was a sense of (the media) looking for a reaction." -Reuters