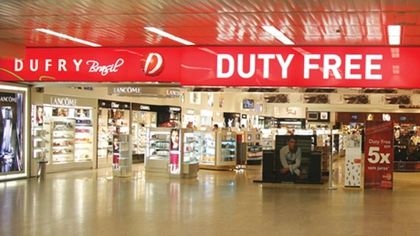 MILAN - Switzerland's Dufry (DUFN.S) has agreed to buy a majority stake in World Duty Free (WDF.MI) in a deal which values the Italian firm at 3.6 billion euros (2.6 billion pounds) and will make the combined group the world's biggest travel retailer. Edizione, the holding company owned by the Benetton family and controlling World Duty Free (WDF), said on Saturday it was selling its 50.1 percent stake in the group to Dufry for 10.25 euros per share. It said proceeds from the sale would total 1.3 billion euros, valuing the whole group at just under 3.6 billion euros after taking account of debt, which stood at 970 million euros at the end of last year. The deal is the second high-profile foreign takeover of an Italian company in less than a week after China National Chemical Corp agreed to buy a majority stake in tyre maker Pirelli (PECI.MI) last Sunday.
The Benetton family had indicated that it was willing to give up control of WDF to help the company cope with the rising costs of airport concessions, and also give the retailer more bargaining power with suppliers.
Dufry in turn cements its position as the world's leading travel retailer in a fragmented sector - the combined gorup will have a market share of 25 percent and projected annual sales of $9 billion. One analyst who asked not to be named put the value of expected synergies from the merger at between 80 and 120 million euros a year. Total retail spending at airports around the world is expected to almost double to $59 billion in 2019 from $36.8 billion in 2014, analysts predict, driven by rapid growth in Asia, where more than 350 new airports are set to be built in the next eight years. WORLD DUTY FREE SHARE PRICE The price per share offered for World Duty Free represents a 22 percent premium to the average market price in the last six months, but is below the 11 euros per share which some analysts had expected. Shares in World Duty Free - which operates 495 stores in 98 airports including London's Heathrow and Gatwick - closed at 10.96 euros on Friday. Edizione said Dufry, which last year bought Nuance Group for $1.7 billion, would make a mandatory offer for the rest of World Duty Free and would launch a share offer to help finance the acquisition. It said a group of shareholders representing approximately 30 percent of Dufry's voting share capital had given the Italian group "irrevocable undertakings" to vote in favour of the capital increase. The closing of the sale is expected in the third quarter of 2015. The Benetton family, which also owns toll roads, airports and real estate as well as the Benetton clothing brand, spun World Duty Free out of airport and roadside service station food and drinks retailer Autogrill (AGL.MI) in 2013. The move was aimed at attracting new investors and potentially selling off its stake in the travel retail business. A source close to the Italian company said the price offered by Dufry was 13 times WDF's earnings before interest, tax, depreciation and amortisation. This compares with a price of 10 times EBITDA which Dufry paid last year to buy Nuance. The Edizione statement made no mention of the Qatar Investment Authority, which bankers had told Reuters earlier this month was teaming up with Dufry to bid for the Italian travel retailer. A spokesman for Dufry declined to comment. South Korea's Lotte Group (023530.KS) and China's Sunrise Duty Free were also among the bidders for World Duty Free as was France's Lagardere (LAGA.PA) group, bankers said, although Dufry was always seen as the most obvious partner for WDF. Edizione was advised by BofA Merrill Lynch and Mediobanca, while Dufry was advised by Deutsche Bank.