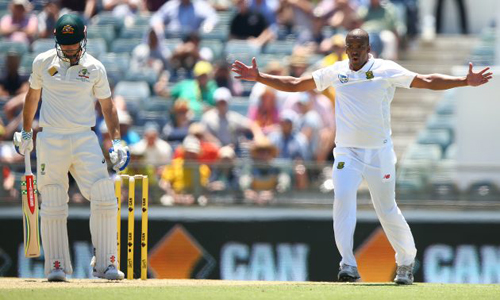 ADELAIDE– South Africa's JP Duminy and Dean Elgar both scored centuries in a third-wicket partnership of 250 to drive the tourists to 295 for three and a lead of 293 runs over Australia at tea on the third day of the first Test on Saturday. Duminy's brilliant innings of 141 finally came to an end to bring up the break, Peter Siddle benefiting from a DRS review when the technology revealed a nick off the bat that carried through to wicketkeeper Peter Nevill. It was a rare moment of pleasure for the hosts on a day when they were unable to separate the pair of left-handers, who had resumed on 104-2, for nearly two full sessions despite 22 wickets having fallen over the first two days of the Test. Elgar will resume unbeaten on 112, having finally claimed his fifth Test century half an hour before tea after a prolonged spell in the "nervous nineties". Australia took the new ball halfway through the second session but it was in the last few overs of the old ball that they had the previous best chance to break the partnership when Elgar, on 81, skied the ball towards Mitchell Starc at mid-off. The left-arm paceman is usually a reliable fielder but lost the ball in the Perth sun, tripped himself over trying to readjust his position and spilled it on the turf to the despair of bowler Nathan Lyon and skipper Steve Smith. By then, Duminy had already secured his fifth Test century in a fluent four-hour knock, studded with fine strokes and featuring 17 fours. The 32-year-old brought up the milestone off 169 deliveries with two runs to deep cover, celebrating his first century in two years and third against Australia by thrusting his bat up into the air at the ground where he made his Test debut in 2008. Elgar made a pair last time he played at the WACA four years ago but after 390 minutes at the crease he was kissing the badge on his helmet and tapping his chest to celebrate his century after smashing the ball through the covers for his 13th four. South Africa skittled Australia for 244 in reply to their 242 on Friday but also lost key paceman Dale Steyn for the rest of the series with a fractured shoulder. Steyn said on Saturday he thought he would be out for at least six months. After Perth, where South Africa have won on their last two visits in 2008 and 2012, the series continues in Hobart before concluding with a day-night Test at Adelaide Oval. –Reuters