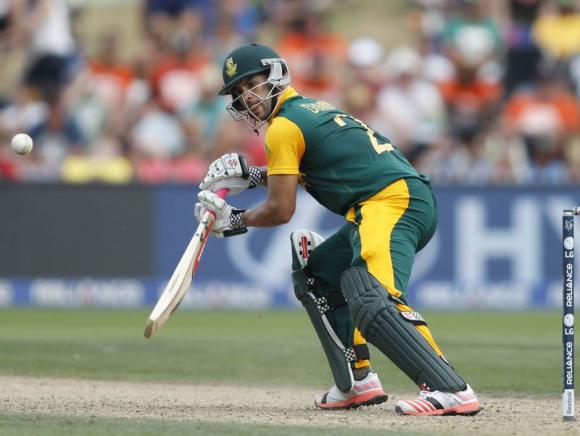 SYDNEY (Reuters) - When JP Duminy finally made his test debut the first question many people asked was, "How good is South Africa's top six if this guy can't make it?" Duminy had made his one-day debut as a 20-year-old in 2004 but had to wait another four years before making his test bow on South Africa's tour of Australia after Ashwell Prince suffered a broken finger. Duminy was quick to grasp his chance in Perth, scoring a half century as he and AB de Villiers combined for 111 runs to guide South Africa to the second highest successful run chase in test history. It was the next match, however, where people really sat up and took notice of the compact left-hander. In the cauldron of the MCG, Duminy calmly rescued South Africa's innings having strode to the crease at 126 for four, which rapidly became 184 for seven. He then combined with bowlers to add 275 for the final three wickets, including a 180-run ninth wicket partnership with Dale Steyn, before he was last out having scored 166. The calmness he exhibited was noted by all as he helped South Africa to an eventual nine-wicket victory and their first series win in Australia. His composure makes him the ideal finisher in South Africa's World Cup side, and that quality was on full display in their opening clash with Zimbabwe when he combined with David Miller in a 256-run partnership, with 146 coming from the final 10 overs. Coming in at number six, Duminy is full of angles, deflections and placement, though he can also blaze away over the top if the situation requires it. FEELING THE PRESSURE While his early career was stalled by a settled top-order in South Africa, lately he has been badly affected by injury. He has played just 27 tests and despite making his ODI debut more than a decade ago he has accumulated just 136 matches in the 50-over format. The 30-year-old tore his Achilles tendon on the tour of Australia in 2012 at a time when his team mates felt he was in the form of his life. The resulting absence gave others the chance to perform, particularly good friend Faf du Plessis. Duminy's place in the side was in jeopardy last year after a poor run of form, and with coach Russell Domingo threatening to axe those who did not perform he was feeling the pressure. But a test century against Australia at Port Elizabeth rescued his career and such was his importance to South Africa's World Cup plans he was wrapped in cotton wool after a knee injury forced him home from last year's tour of Australia and New Zealand. While his role is that of specialist batsman, he has adapted to team requirements and also acts as the side's second spinner. He was even told last year he could expect to play as the specialist slow bowler in test matches from time to time. That will be tested on Friday against West Indies when he is likely to have to bowl significant number of overs in partnership with Imran Tahir on a Sydney Cricket Ground wicket that typically favours the slow bowlers.