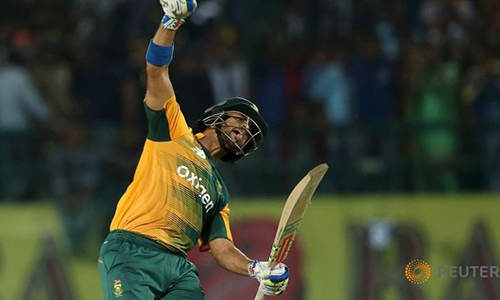 DHARAMSALA, INDIA – Duminy's batting heroics secured South Africa a thrilling seven-wicket victory in the first Twenty20 International despite Indian opener Rohit Sharma burnishing his limited overs reputation with a blistering century on Friday. Needing 10 runs off the last over chasing a 200-run victory target, Duminy's seventh six tied the contest before he took a single to seal victory with two balls to spare and put his team 1-0 up in the three-match series. Duminy remained unbeaten on 68 off 34 balls, frustrating India who rode Sharma's century to post a commanding 199-5 at one of the most picturesque cricket stadiums in the world. As the only batsman with two ODI double centuries to his name, Sharma blasted 106 off 66 balls, highest score by an Indian in a Twenty20 International, as the hosts threatened to go beyond the 200-mark at one stage. After opening partner Shikhar Dhawan perished in his half-hearted pursuit of a non-existent second run, Sharma teamed up with Virat Kohli (43) to lay the foundation for a big total. The duo added 138 runs, an India record, in 12.2 overs and the elegant Sharma belted five sixes and 12 boundaries in his scintillating knock. The Mumbai batsman brought up his century clobbering Marchant de Lange for a six to become the second Indian, after team mate Suresh Raina, to register a century in all three formats of the game. AB de Villiers (51) and Hashim Amla (36) led South Africa's robust reply with a breezy 77-run opening stand before falling in quick succession. At 95-3, South Africa looked in trouble but Duminy and Farhaan Behardien (32 not out) refused to throw in the towel. Duminy hit spinner Axar Patel for three successive sixes in the 16th over to turn the match on its head and stayed put till the end to see the visitors home in a man-of-the-match winning performance. Cuttack hosts the second Twenty20 International on Monday. –Reuters