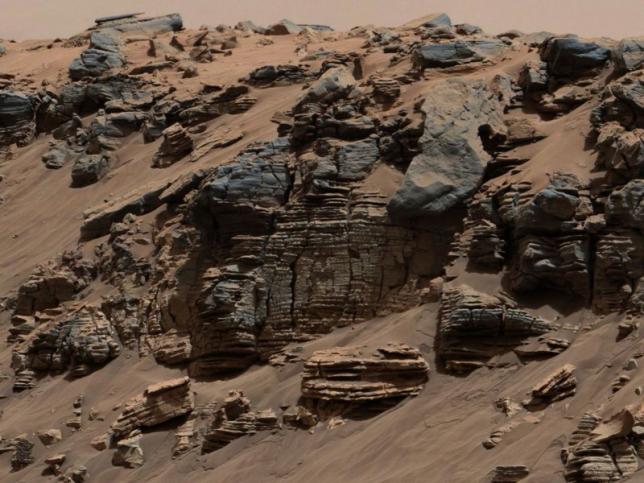 CAPE CANAVERAL - Mars has thousands of glaciers buried beneath its dusty surface, enough frozen water to blanket the planet with a 3.6-foot(1.1- meter) thick layer of ice, scientists said on Wednesday. The glaciers are found in two bands in the mid-southern and mid-northern latitudes. Radar data, collected by Mars-orbiting satellites, combined with computer models of ice flows show the planet has about 5.3 trillion cubic feet (150 billion cubic meters) of water locked in the ice, according to a study published in this week’s issue of the journal Geophysical Research Letter. "The ice at the mid-latitudes is therefore an important part of Mars' water reservoir," Nanna Bjornholt Karlsson, a researcher at the University of Copenhagen’s Neils Bohr Institute, said in a statement. Scientists have been trying to figure out how Mars transformed from a warm, wet and presumably Earth-like planet early in its history into the cold, dry desert that exists today. Billions of years ago, Mars, which lacks a protective, global magnetic field, lost much of its atmosphere. Several initiatives are under way to determine how much of the planet’s water was stripped away and how much remains locked in ice in underground reservoirs. "The atmospheric pressure on Mars is so low that water ice simply evaporates and becomes water vapor,” the institute said in a news release. Scientists suspect that the glaciers remained intact because they are protected under a thick layer of dust. In addition to evidence of river beds, streams and hydrated minerals, scientists studying telltale molecules in the Martian atmosphere last month concluded that the planet probably had an ocean more than a mile deep covering almost half of its northern hemisphere. Mars has lost about 87 percent of that water, scientists said. Currently, the planet’s largest known water reservoir is in the polar caps. - Reuters