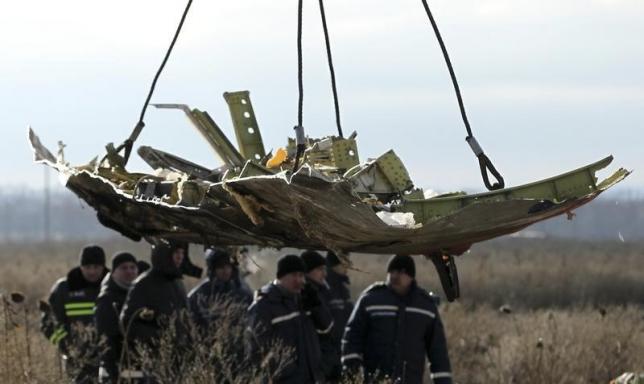 AMSTERDAM - Dutch prosecutors said on Monday they are looking for witnesses in eastern Ukraine who may have seen a Russian-made BUK rocket being fired at Malaysia Airlines flight MH17, saying this was the "leading scenario" in their crash investigation. The Netherlands is heading an international probe into the July 17 disaster, which killed 298 passengers and crew, two-thirds of them Dutch nationals. Western governments and Kiev, citing intelligence intercepts, have repeatedly blamed pro-Russian rebels. Moscow has denied this and suggested the plane was hit by a missile fired by a Ukrainian fighter. Prosecutors said they have gained a "clearer impression" about the BUK-missile theory -- one of four initial scenarios being investigated. They gave no further details. "There is still more than one scenario, but the one of the BUK rocket has a lot of unanswered questions and that's why we have put out an appeal," said Wim de Bruin, prosecution spokesman. "The BUK scenario is the leading scenario." The investigation team is looking for "witnesses who can speak about the transportation, personnel and firing of a BUK-missile system in the region of Donbass in eastern Ukraine," a statement issued by the prosecutors said. "This appeal for witnesses does not mean that police and prosecutors have definitively concluded what caused MH17 to crash," the statement said. "For that, more investigation is needed." A video appeal, carrying images of the BUK weapon system on a flatbed truck and audio recordings of intercepted telephone conversations between pro-Russian separatists, was being aired on television and radio and distributed on websites and social media. Witnesses were called upon to provide information to the joint international investigation, which also includes officials from Belgium, Ukraine, Australia and Malaysia. Villagers in eastern Ukraine told Reuters earlier this year they saw a missile flying directly overhead just before flight MH17 was shot out of the sky, providing the most detailed accounts to date that suggest the rocket was launched from territory held by pro-Russian rebels. - Reuters