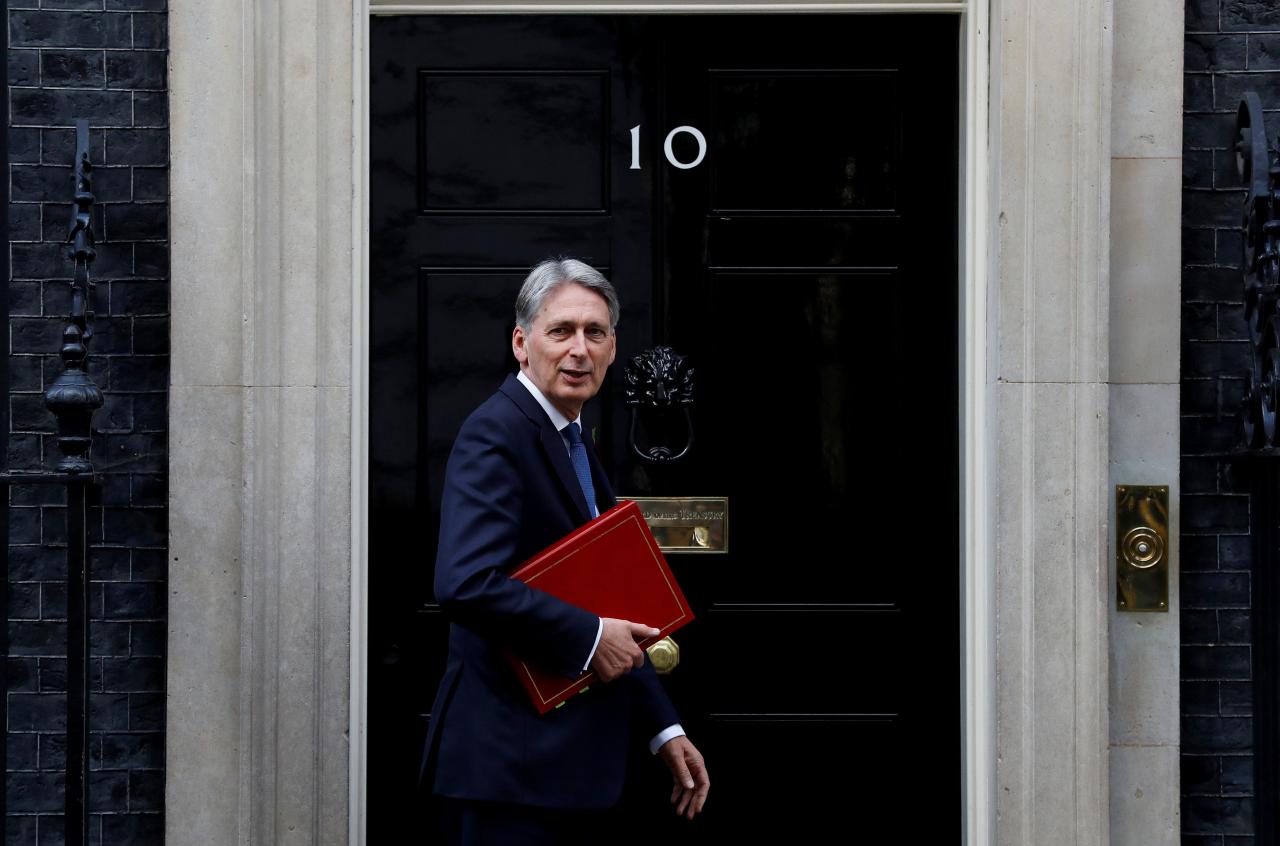 DUBLIN (Reuters) - The diverging trajectories of Britain and other major economies is set to be further laid bare in the coming week with London’s budget forecasters poised to cut their growth outlook and data elsewhere likely to remain solid.

Chancellor Philip Hammond will deliver Britain’s budget for 2018 on Wednesday, likely the last full spending and tax plan before the terms of Brexit are hammered out with the economy set for a difficult year as its EU withdrawal approaches.

Under pressure for bold action after a disastrous election in June highlighted voters’ weariness with years of austerity, Hammond has almost no scope for sizeable tax cuts or a big increase in investment, unless he tears up his budget rules aiming to turn the deficit into a surplus by the mid-2020s.

Coming hot on the heels of the first increase in UK interest rates for over 10 years, Britain’s budget forecasters have said they will “significantly” cut their outlook for productivity growth, complicating an already delicate task.

“The Chancellor is in an unenviable position heading into the budget,” Mark Gregory, chief UK economist at accountancy firm EY, wrote in a note.

“Given the major uncertainties facing the economy centred on Brexit, the Chancellor is reportedly concerned that investor confidence in the UK could be seriously damaged if he abandons the fiscal framework adopted only a year ago.”
“However if he maintains his fiscal stance, the UK economy will be facing both monetary and fiscal tightening at the same time as growth slows — a potentially unappetising cocktail.”
Such a predicament means any ‘giveaways’ in areas such as house-building and public sector pay will have to be balanced by ‘takeaways’, according to economists at Oxford Economics, who predict a fiscally-neutral set of measures.

While economists polled by Reuters this week predicted that British economic growth will remain tepid over the coming few years, and could even be worse than currently forecast, the euro zone is exhibiting increasingly better fortunes.

Polling over the same period suggested the euro zone economy will mark its best year in a decade and maintain solid growth well into 2018, with respondees noting that the risk was that their forecasts might not be optimistic enough.

Just three years ago, Britain’s economy was growing at an annual rate of 2.9 percent, more than twice that of the euro zone.

Top investors attending the Reuters 2018 Global Investment Outlook Summit this week were also enthused by strong European growth and tightening of the Franco-German axis at the heart of the euro zone.

That differing momentum is likely to be highlighted the day after Hammond’s budget with the release of flash surveys of private business activity in France, Germany and the euro zone as a whole.

The euro zone’s composite Purchasing Managers’ Index (PMI) eased off slightly to 56.0 from 56.7 in October but remained in line with its third quarter average and new orders rose.

PMIs for Japan and the United States follow on Friday. Few expect US Thanksgiving holiday week data or Wednesday’s minutes from the Federal Reserve’s last policy meeting to halt a third interest rate hike in 2017 next month.

“We don’t expect any significant news from the minutes of the November 1 FOMC (Federal Reserve’s Federal Open Market Committee) meeting,” RBC Capital Markets economists wrote in a note. “Which is fortunate because most market participants will be busy baking pumpkin pies.”