Dying on stage: comedian Marx has come closer than most 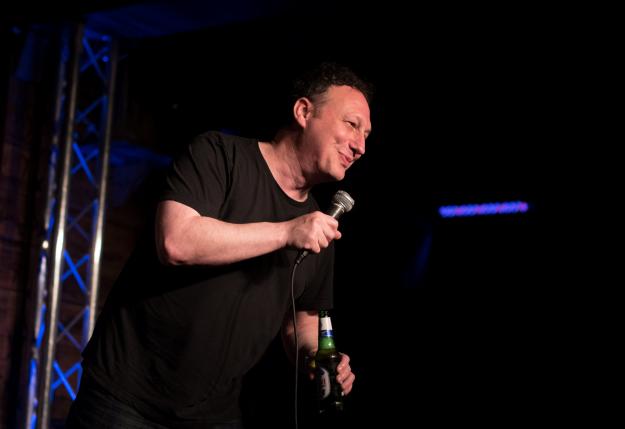 Dying on stage: comedian Marx has come closer than most

GREENWICH, England – Like most stand-up comedians, Carey Marx has stories about "dying on stage", but in his case they are almost literally true. Just weeks after a heart attack at the age of 46 which he put down to smoking, drinking and poor diet, economic necessity forced Marx back to work. But the crowd reacted badly when he tried to make jokes about his illness, chanting: "Die! Die! Die!" He shuffled off stage and into an ambulance. He survived but only after a second operation to keep his arteries open. "I tried to do material about the heart attack and I think if you do material like that badly you just embarrass the audience," Marx told Reuters ahead of a gig in south London. "And I was also was genuinely afraid of hecklers, and that's when comedy becomes frightening. You should never be afraid of the heckler. When you feel your heart racing and you're aware that you could go down at any moment then it's pretty scary." Just hours after his heart attack, Marx told hospital staff he intended to get to a gig that evening. The doctor, astonished that he was contemplating rushing back into such a high-stress occupation, inadvertently gave him his first heart joke. "He said: 'You can't do comedy.' What he hadn't bargained for is I've been told that loads of times!" Marx says in "Intensive Carey", a show about his heart attack which he performed at the Edinburgh Festival and BBC radio. These days the Londoner, a combative, confident performer who is both lauded and criticized for his "dark" subject matters, rarely does material about his heart attack, partly because "I don't want to ruin their night" but more because it is so personal. "I found it embarrassing to talk about at first. I am able to criticize the world and behavior and rules normally (during my comedy) because they don't affect me personally and I don't mind how the audience react to it. "But if I had an audience I didn't really like, I didn't want to tell them the story, because it was personal. I felt like I had an investment in it." One of the most touching stories in "Intensive Carey" is when Marx recalls walking to the local shop to buy a bag a sugar. Severely weakened by his heart disease, he has to clutch it desperately to his chest as he staggers home, aware that people around him must be thinking: "Look at that poor old man. He really loves sugar." Research published in the "International Journal of Cardiology" (tinyurl.com/gkpbuyc) that found standup comedians were particularly at risk of fatal illness, with "an inverse association between comedic ability and longevity", is something of a double-edged sword for Marx. "Should I be putting 'has had a heart attack' amongst the reviews on my flyers?" he asked. Marx rejects the idea that stress levels and personality traits are to blame for comedians' poor health, and says it is more to do with lifestyle. “Nowadays there’s a lot of very healthy people on the circuit. When I started it was a lot more rock and roll." Rather than grabbing a greasy kebab after a late-night gig, he says: "Lots of comedians arrive with their packed lunch. I have never been that good a person." –Reuters