E-cig use soared, cigarette use fell among US youth in 2014: CDC 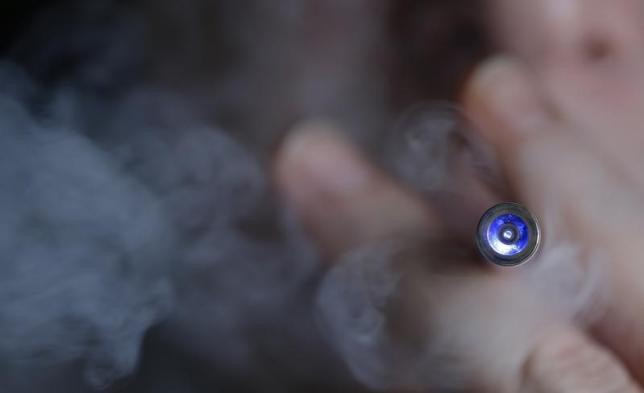 E-cig use soared, cigarette use fell among US youth in 2014: CDC

WASHINGTON - Electronic cigarette use among US middle and high school students tripled in 2014 while cigarette use fell to record lows, according to provocative new data that is likely to intensify debate over whether e-cigarettes are a boon or bane to public health. Among high school students, e-cigarette use jumped to 13.4 percent in 2014 from 4.5 percent in 2013, according to the Centers for Disease Control and Prevention. Cigarette use over the same period fell to 9.2 percent from 12.7 percent, the largest year-over-year decline in more than a decade. Overall, tobacco use among high school students grew to 24.6 percent from 22.9 percent. The data sparked alarm among tobacco control advocates who fear e-cigarettes will create a new generation of nicotine addicts who may eventually switch to conventional cigarettes. "Nicotine exposure at a young age may cause lasting harm to brain development, promote addiction, and lead to sustained tobacco use," Dr. Tom Frieden, director of the CDC, said in a statement. Mitch Zeller, director of the Food and Drug Administration's tobacco division, said the data "forces us to confront the reality that the progress we have made in reducing youth cigarette smoking rates is being threatened." But e-cigarette proponents argue that the CDC data could equally suggest that smoking rates fell because young people took up e-cigarettes instead of traditional cigarettes. "There is no firm conclusion that one can draw from correlational data," Jed Rose, director of the Center for Smoking Cessation at Duke University Medical Center, said in an interview. "But it is equally amenable to the interpretation that e-cigarettes are diverting young people away from cigarettes." The data was drawn from the 2014 National Youth Tobacco Survey which showed current e-cigarette use, defined as use at least once in the past 30 days, surpassed current use of every other tobacco product for the first time. It was not clear how many e-cigarette users were previously smokers and had switched, or how many picked up e-cigarettes who would otherwise not have smoked anything. Altogether, 4.6 million middle and high school students were current users of any tobacco product. Of those, 2.2 million used at least two products. The data showed hookah use nearly doubled to 9.4 percent from 5.2 percent, a disturbing trend since hookah smoking, in which smokers inhale burned tobacco through a water pipe, carries many of the same health risks as cigarette smoking. An hour-long hookah smoking session involves 200 puffs, according to the CDC, while smoking an average cigarette involves 20 puffs. The amount of smoke inhaled during a typical hookah session is about 90,000 milliliters, compared with 500-600 milliliters inhaled from a cigarette. "Hookah is very bad and is not a safer alternative to cigarette smoking because it has carbon monoxide and all sorts of cancer-causing agents," Rose said. "It should not be confused with smokeless forms of nicotine use." The CDC said nearly half the students used more than one tobacco product. The most popular was e-cigarettes, followed by hookah. Cigarettes came in third place followed by cigars, smokeless tobacco and pipes. Big tobacco companies, including Altria Group, Lorillard Tobacco Co and Reynolds American Inc are all developing e-cigarettes, as are many independent companies. One of the biggest independents is Logic Technology, whose president, Miguel Martin, said his company "spends a lot of time and money to make sure children don't get access" to the company's products. The vast majority of Logic's sales go through brick-and-mortar stores and it uses sophisticated age-verification technology for its online sales. But not everyone uses this kind of technology. "What this highlights is the need to work on the access issue," he said. "There's no disagreement among responsible companies that these products shouldn't go to kids." Among middle school students, current e-cigarette use more than tripled to 3.9 percent in 2014 from 1.1 percent in 2013, while cigarette use remained unchanged, the CDC said. Hookah use among middle school students jumped to 2.5 percent in 2014 from 1.1 percent in 2013. Overall tobacco use was 7.7 percent for middle school students in 2014. The Food and Drug Administration regulates cigarettes, cigarette tobacco, roll-your-own tobacco and smokeless tobacco and expects to publish a rule extending its authority to e-cigarettes, hookah and other tobacco products in June. "These staggering increases in such a short time underscore why FDA intends to regulate these additional products to protect public health," Zeller said. - REUTERS