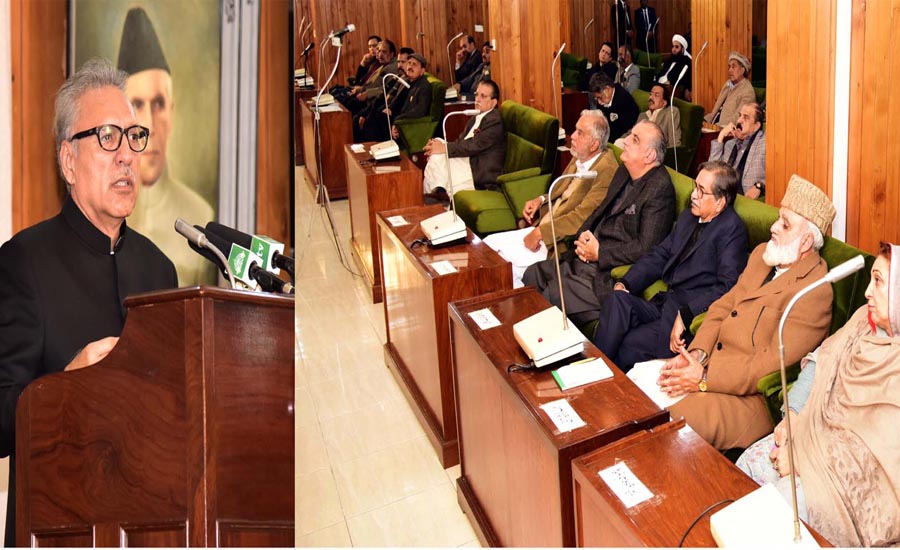 MUZAFFARABAD (92 News) – President Dr Arif Alvi said that each Indian prime minister from Jawaharlal Nehru to Narendra Modi had hatched conspiracy against Kashmiris and refrained from talks to hide their cruel face. Addressing a special session of Azad Jammu and Kashmir Legislative Assembly in Muzaffarabad on Kashmir Solidarity Day, he urged India to stop its ongoing atrocities in Occupied Kashmir and allow the international observers to investigate the human rights violations in the Valley. Arif Alvi said that all political parties in Pakistan are on the same page vis-a-vis Kashmir dispute and they will always stand by their Kashmiri brethern. The President demanded India to immediately release all the political prisoners and abolish the black laws. “India should lift restrictions on the media and Internet in the Occupied Valley so that the Kashmiri people could exercise their right to expression.” The President also called upon the United Nations to send a fact-finding mission to Occupied Kashmir to ascertain the actual situation on the ground. Paying glowing tributes to the sacrifices rendered by the Kashmiri people, the President said that India cannot suppress the freedom struggle through oppression or use of force. Condemning the Indian atrocities, President Arif Alvi said India is not ready to hold dialogues with Pakistan in order to perpetuate its illegal occupation of Kashmir. “However, the solution of all disputes lies in peace dialogue.” President Arif Alvi said that all resources will be provided to make Azad Kashmir a model region. Speaking on the occasion, Azad Kashmir Prime Minister Raja Farooq Haider thanked Pakistani leadership for consistently supporting the Kashmiri people in their struggle for right to self-determination. He said that the Quaid-e-Azam had established the relation between the Kashmiris and Pakistanis. “The national poet Dr Allama Muhammad was the torchbearer of solidarity between Kashmir and Pakistan,” he said, adding the Kashmir dispute is the problem of the Pakistani nation. The AJK PM said that even a 19-month-old girl has given her eyesight to Kashmir Liberation Movement. “We thank the Pakistan people for expressing solidarity with the Kashmiris,” he said. Earlier, the House also offered Fateha for the martyrs of Occupied Kashmir.