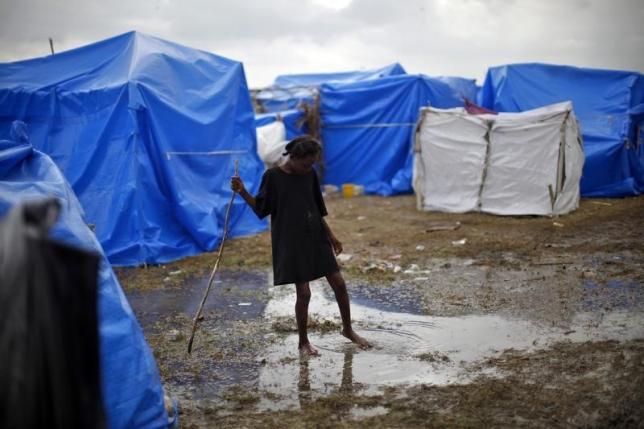 PORT-AU-PRINCE - Haitian officials are reporting a spike in cholera cases late last year and carrying over into the first three months of 2015 as an early start to the rainy season has public health workers worried. As of March 28, the Haitian Ministry of Health confirmed at least 11,721 cases of cholera, more than a 300 percent increase from the same period last year. “Last May there were hardly any cholera cases. Everybody was very excited, thinking this is the first step toward elimination,” said Oliver Schulz, head of the Haiti office of Doctors Without Borders. “But then the second peak in November/October was so much stronger than anything we’ve seen in the years before.” Haiti has two rainy seasons that tend to generate spikes in the waterborne bacterial disease; between April and June, and another, which coincides with hurricane season, from late summer until November. “People stopped talking about cholera, I thought there was no more cholera in the country,” said Givenchi Predelus, who showed up with the virus at a treatment center last week. Last month, the United Nations mission in Haiti (MINUSTAH) requested $36.5 million for cholera programs for the next two years. The figure is based on an assumption that only 28,000 people will become infected this year, a fraction of the peak of the epidemic in 2011 when more than 350,000 were infected. Haiti leads the world in suspected cholera cases. More than 8,700 people have died after contracting the disease; 52 during last December alone and 113 so far this year. Since it was introduced in 2010, more than 731,000 people have been infected, according to the Pan American Health Organization. There had been no recorded history of cholera in the country before the 2010 outbreak, believed to have been caused by human waste from a Nepalese-staffed U.N. base seeping into a river used for bathing, laundry and drinking. The U.N. has been sued by the Boston-based activist group, the Institute for Justice and Democracy in Haiti (IJDH), demanding improved water and sanitation infrastructure, compensation for the victims, and an apology. A New York federal judge tossed the suit in January, and IJDH is appealing. U.N. Secretary General Ban Ki-moon is seeking support for a $2.2 billion, 10-year cholera-elimination campaign that he launched in December 2012 with the presidents of Haiti and the neighboring Dominican Republic. - REUTERS