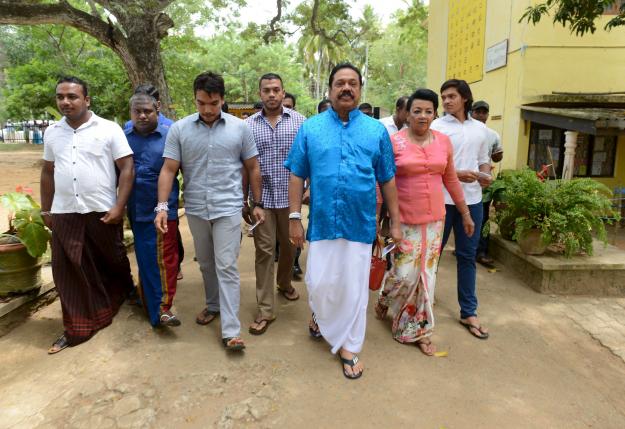 COLOMBO - Former president Mahinda Rajapaksa's bid to stage a political comeback in Sri Lanka appeared destined to fail as early general election results on Tuesday showed the alliance that toppled him making gains. If initial trends are confirmed, the results would mark a triumph for President Maithripala Sirisena, who beat Rajapaksa in a presidential election in January and called early parliamentary polls to secure a stronger mandate for reforms. Defeat for Rajapaksa would keep Sri Lanka on a non-aligned foreign policy course and loosen its ties with China, which during his rule pumped billions of dollars into turning the Indian Ocean island into a maritime outpost. Results from six out of 22 districts showed Prime Minister Ranil Wickremesinghe's United National Party (UNP) gaining seats in the 225-seat parliament while the alliance led by Rajapaksa's Sri Lanka Freedom Party (SLFP) lost ground. In downbeat comments to Reuters, Rajapaksa, 69, said he was unlikely to lead the next government. He stopped short of conceding defeat ahead of full results expected at around midday (0230 EDT). "I will support good policies and oppose bad things," the two-term president said by telephone from his southern home in Hambantota. A senior Rajapaksa ally was more fatalistic: "We have lost the election," Udaya Prabhath Gammanpila, who was contesting in Colombo, said in a Facebook post. He forecast that the UNP would win 11 districts - enough to form a minority government. The SLFP-led alliance would win nine districts and the Tamil National Alliance, a regional minority party, three. The nationalist strongman has set his sights on becoming premier of an SLFP-led government but Sirisena, who succeeded him as the party's leader in January, has ruled that out and purged Rajapaksa loyalists from senior posts. Their bitter power struggle has overshadowed the election in a country which, since independence from Britain, has had a history of political feuding that has often spilled over into violence and even the assassination of its leaders. A strong result for the UNP would likely see Wickremesinghe confirmed as prime minister of a center-right government that would seek to revive stalled reforms to make the government more open and accountable. Aides to Sirisena say he wants to form a broad-based national unity government, with his own loyalists from the SLFP, that would be able to muster a two-thirds majority in parliament to pass crucial constitutional reforms. -Reuters