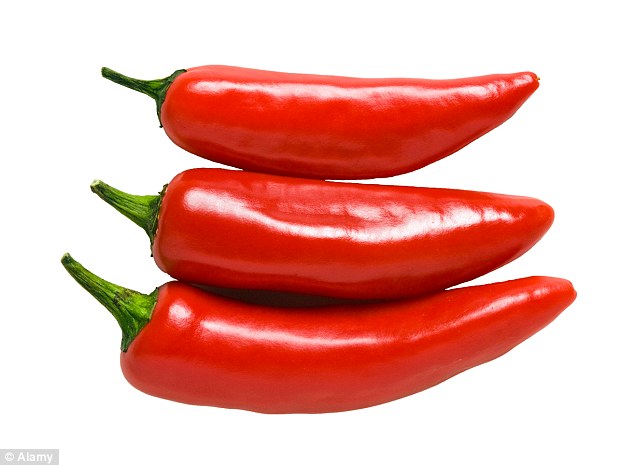 It's long been thought that chillies can help us lose weight. Now, new research has proved the fiery food can aid weight loss by speeding up metabolism. A study found capsaicin – the ingredient that gives chilli peppers their heat - could help burn off fat in the body. The temptation to eat fatty foods is often so strong that, for many, they can't resist eating fatty or sugary foods even if they are trying to cut down on calories. Now, researchers believe capsaicin could provide a solution to this problem; speeding up the metabolism without the need to restrict the diet. University of Wyoming researchers found capsaicin may stimulate the body to burn energy and create heat (a process known as thermogenesis) – burning off calories in the process. It does this by activating receptors in the body which set off the process of energy burning. These receptors are found in white and brown fat cells. In the body, white fat cells soak up calories and store them as fat – the dreaded type visible in pot bellies, love handles and wobbly thighs that is the enemy of dieters. It is known as ‘bad’ fat for this reason. Brown fat, found in small amounts on the shoulders and neck, actually burns fat to heat the body – and is therefore known as ‘good’ fat. The researchers found that capsaicin in the diet was able to stimulate a receptor called potential vanilloid 1 (TRPV1) channel protein. Activating this receptor suppresses obesity associated with a high-fat diet, the researchers found. They believe this is because it induces ‘bad’ white fat cells to become energy-burning ‘good’ brown fat cells. The researchers carried out the study on one group of wild mice, and another group of mice who had been genetically engineered to lack the TRPV1 Receptor. They fed both mice a high fat diet, 0.01 per cent was made up of capsaicin. Capsaicin prevented the weight gain associated with eating a high fat diet in the wild mice, but not the mice that lacked TRPV1. It did this without having any effect on how much food or water the mice consumed. ‘It did significantly increase the metabolic activity and energy expenditure in wild type mice fed a high-fat diet, but not for mice that genetically lack TRPV1,’ researcher Vivek Krishnan, of University of Wyoming’s School of Pharmacy said. This is because the fiery ingredient induces ‘bad’ white fat to become ‘good’, energy-burning brown fat and also stimulates the body to create heat, he added. These steps burn off calories and counteract obesity. This may help to prevent and manage obesity and other related health complications such as Type 2 diabetes, high blood pressure, and cardiovascular diseases, the researchers said. However, they added this effect has not yet been demonstrated in carefully-controlled clinical trials. Next, the researchers want to further understand the mechanism by which capsaicin prevents obesity, and carry out more trials to further prove that it can help manage weight. They will concentrate on developing drugs which activate the TRPV! Receptors, to help prevent obesity – and carry out human clinical trials - they said. They are even developing a ‘nanoparticle-based sustained-release formulation of capsaicin’ in the laboratory currently, and have submitted a patent application for this. A third of the world’s population is currently overweight or obese, according to World Health Organization’s estimates. This staggering statistic has made finding ways to address obesity a top priority for many scientists around the globe. The research was presented during the Biophysical Society’s 59th Annual Meeting in Baltimore, U.S. -Web Report