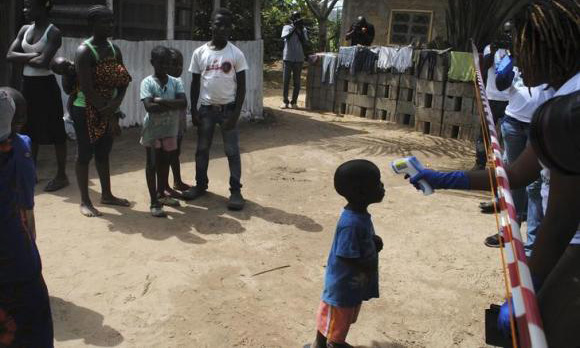 LONDON - The Ebola virus causing a devastating epidemic in West Africa is far more deadly in children than in adults, killing around 90 percent of babies under one who become infected, researchers said on Wednesday. A study led by scientists at the World Health Organization (WHO) and Imperial College London found that, although infection rates are lower in children than adults, babies and toddlers who get the disease have a far slimmer chance of survival. The virus, which causes hemorrhagic fever and induces internal and external bleeding, profuse vomiting and diarrhea, is killing 90 percent of infants in the current outbreak and around 80 percent of children aged between one to four years, the scientists found. Older children are much more likely to survive the disease - it has killed 52 percent of those infected aged 10 to 15. "These findings show that Ebola affects young children quite differently to adults, and it's especially important that we get them into treatment quickly," said Christl Donnelly, who co-led the study Imperial's Centre for Outbreak Analysis and Modelling. "We also need to look at whether young children are getting treatment that's appropriate for their age." The world's worst Ebola epidemic has killed more than 10,200 people in total in the three most affected countries of Guinea, Liberia and Sierra Leone since March 2014 when it was first confirmed in the forest region of Guinea. As of March 2015, almost 4,000 children under 16 have been affected by Ebola in the current epidemic. Donnelly's team, whose work was published in the New England Journal of Medicine on Wednesday, analyzed data on Ebola cases in children under 16 in Guinea, Liberia and Sierra Leone. As well as the higher risk of death in younger children, they found the incubation period - the time between becoming infected and showing symptoms - was 6.9 days in children under a year, compared with 9.8 days in children aged 10 to 15. There were also differences in symptoms, with children more likely than adults to have a fever when they first see a doctor but less likely to have difficulty breathing or swallowing, or to have pain in the abdomen, chest, joints or muscles. "The very youngest of children - neonates - appear to have the worst outcomes from Ebola," said Robert Fowler, a co-researcher on the study from the University of Toronto. He said the findings about how children suffer more show the need to "evolve more dedicated and specialized means of caring for them in an Ebola outbreak". - REUTERS