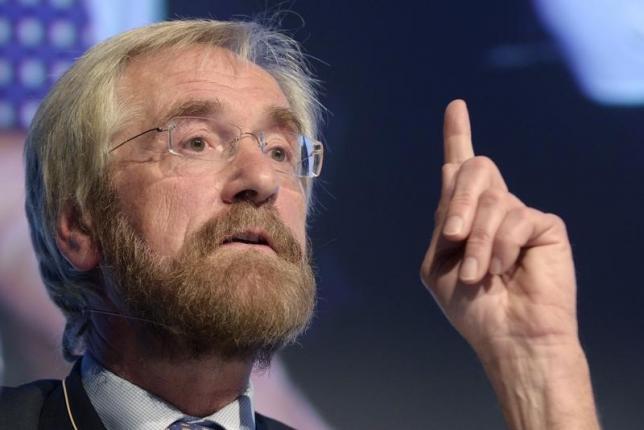 ZURICH - The European Central Bank's chief economist reiterated the bank's "readiness and decisiveness" to modify its trillion-euro bond-buying programme should economic turbulence merit decisive action, according to an interview in a Swiss newspaper. Interviewed by the Neue Zuercher Zeitung, Peter Praet defended the bank's stimulus programmers, including quantitative easing, saying they had helped avoid a damaging financial panic. As turbulence in emerging markets intensifies, he said the ECB remains ready to modify or expand the programme, now seen as buying more than one trillion euros ($1.13 trillion) in bonds to counter a potentially deflationary spiral. "What's important is to emphasise our readiness and our decisiveness, should the need for action arise," Praet, of Belgian and German ancestry, told the newspaper. "That's premature, at this time, but the risks in the world economy have increased significantly. We have had to correct our economic forecasts downward and we want to be ready to act, should the conditions demand it." Earlier this month, the bank cut its growth and inflation forecasts, warning of possible further trouble from China. For the first time, ECB President Mario Draghi said explicitly the bond-buying programme may be extended. Despite risks posed by an expansive monetary policy, Praet said the ECB is convinced it acted appropriately, in part because its sees no "speculation bubbles" on the horizon. "The risks to financial stability are currently limited," said Praet, who from 2000 to 2011 was executive director of the National Bank of Belgium. Praet said the ECB's economic forecasts from earlier in 2015 weren't too optimistic. "The adjustment downward in September wasn't big and was mostly related to the correction in emerging markets," he said. "The economic recovery in the euro-zone is intact." Praet contended the European Union would be far stronger and better equipped to manage crises by 2020 as countries tackle structural reforms and the continents' banks become fully integrated. "We're seeing encouraging signs in the euro zone and especially in countries like Spain and Ireland, but also in Portugal," he said. "Italy began its reforms too late, but is now on the right path." While the situation in Greece remains difficult, he's optimistic that the new programme is a step in the right direction. "While the programme is demanding, we're convinced that the reforms will help Greece boost growth and wrest itself from the crisis," Praet said, adding he would limit his remarks, given the vote in Greece on Sunday will determine the government to oversee austerity measures demanded by the country's creditors. Praet downplayed the contention that the ECB's expansive monetary policy is the central culprit behind the rise in the value of the Swiss franc against the euro. "The ECB took responsibility during the crisis and helped to reduce uncertainty in the financial markets - I'd even say to avoid a panic," he said. "Consequently, the ECB helped reduce pressure on the franc." -Reuters