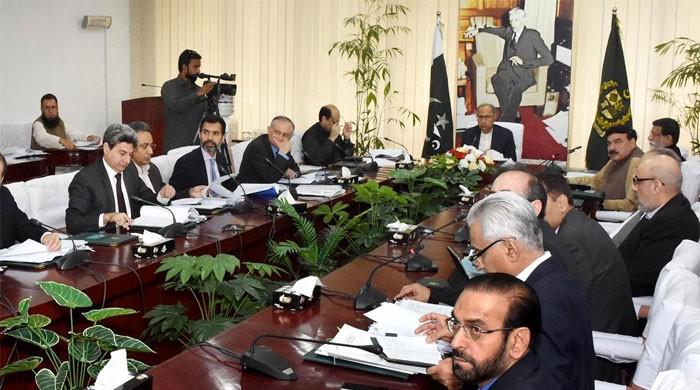 ISLAMABAD (92 News) – The Economic Coordination Committee (ECC) is likely to raise the gas prices at today’s meeting. The meeting of Economic Coordination Committee will be held in Islamabad under the chair of Adviser to Prime Minister on Finance Dr Abdul Hafeez Shaikh. The sources said that a six-point agenda would be discussed during the meeting. The ECC is expected to approve hike in gas prices. Oil and Gas Regulatory Authority (Ogra) has already proposed a 214 per cent hick in gas prices. It also added that the ECC is likely to approve $100 million for the Pakistan Mortgage Refinery Company while a supplementary grant of Rs80 million can be approved for the finance ministry. A supplementary grant of Rs100 million for the e-governance programme is also included in the agenda of the meeting. Earlier, the Economic Coordination Committee of the Cabinet has given a go-ahead for import of three hundred thousand tons of wheat. The meeting was held in Islamabad under the chair of Adviser on Finance Hafeez Shaikh. The ECC was informed that the first shipment of wheat is likely to arrive in the country by 15th of next month. The committee asked Punjab and PASSCO to release their stocks to overcome wheat shortage in the country. The meeting was informed that Punjab and PASSCO have wheat stocks of forty one lakh tons. Earlier, on a summary submitted by the Ministry of Maritime Affairs, the ECC approved a proposal regarding necessary amendments and exemptions in Income Tax Ordinance, Sales Tax Act and Custom Act for the Gwadar Port and Gwadar Free Zone. The decisions were taken at a meeting of the ECC held at the Cabinet Block on Wednesday with Adviser to the Prime Minister on Finance & Revenue Dr Abdul Hafeez Shaikh in the chair. The meeting also approved proposals submitted by the Ministry of Industries & Production for payment of salaries to the employees of Pakistan Machine Tool Factory (PMTF) and Pakistan Steel Mill (PSM) as well as a proposal of the Power Division for payment of electricity charges by the Government of Sindh as Thar subsidy for 4514 domestic consumers of Taluka Islamkot.