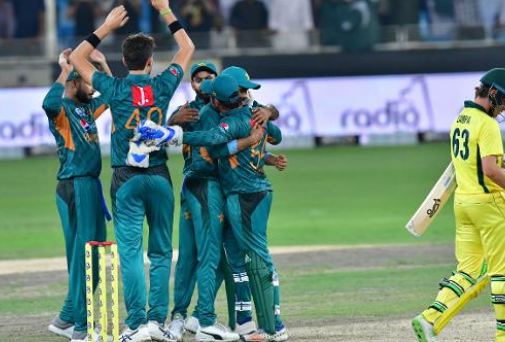 DUBAI (Web Desk) – Babar Azam and Mohammad Hafeez each made 40s, while Imad Wasim claimed 1/8, as Pakistan claimed an 11-run victory in a cracker of a contest at Dubai.

Batting first, Pakistan made their way to 146/7 thanks largely to a 70-run stand between Mohammad Hafeez and Babar Azam. They helped rebuild after the early loss of belligerent opener Fakhar Zaman, given out caught behind on review off Nathan Coulter-Nile. Azam and Hafeez did well to alleviate the pressure that dismissal brought and to build a platform, but with their partnership occupying more than 10 overs, it left plenty for their lower-order batsmen to do to get Pakistan up to a strong total; perhaps too much. It was Billy Stanlake who broke the stand, enticing Hafeez into pulling straight to deep square leg for a 34-ball 40. Soon after, Short removed Azam for a 44-ball 45. He had struggled to score fluently, striking just three fours, and in trying to up the rate, only succeeded in holing out to Finch at long-off. It was Short’s only wicket, but the left-armer’s spell was still an impressive won. Though only rated as a part-timer, he conceded less than a run a ball in his three-over spell of spin, tying down Pakistan effectively. With an opening secured, Coulter-Nile resumed his work, and ensured Pakistan didn’t get a big finish. He forced Hasan Ali and Shoaib Malik to mis-time and hole out, and finished with superb figures of 3/18 from three overs. His exploits were made all the more impressive by how his Australian pace-bowling counterparts struggled. Stanlake and Andrew Tye leaked 76 runs from their combined eight overs, though Stanlake did claim two wickets, adding the scalp of Asif Ali, who timed well but found the man on the point fence, to his earlier dismissal. Compared to how Australia’s spinners fared – they conceded just 47 runs from their nine overs – it demonstrated how the pitch suited slow bowling, and indicated that how Australia’s batsmen took on Pakistan’s twirlers could be key to the result as the home side attempted to defend a slightly below-par total. In the end, despite Glenn Maxwell’s heroics, it was Pakistan’s spinners who decided the contest. Australia got of to a better start than in the first T20I, but considering they lost two wickets in the first over of that chase it isn’t saying much, and they soon found themselves 19/2 after five overs. Left-arm spinner Imad Wasim claimed both wickets, the first fortuitously via a deflected straight drive which caught D’Arcy Short short at the non-striker’s end, and the second after building up plenty of pressure with 15 consecutive dot balls, forcing Chris Lynn to miscue to cover, where Shadab Khan took an acrobatic catch. Wasim went onto complete a four-over spell of 1/8, earning him his second Player of the Match award in succession. It was the catcher of his second wicket who struck the next two blows, Australia captain Aaron Finch holing out to long-on for just 3 in the seventh over, and Mitchell Marsh caught behind fencing at a leg-break. Marsh and Glenn Maxwell had added 30, and with Maxwell having a reputation as one of Australia’s best players of spin, he just needed someone to stick with him. Neither Alex Carey caught at extra cover off a leading edge off Hafeez – or Ben McDermott – run out by a brilliant pick up and throw from Zaman – were able to, but Coulter-Nile, the star with the ball, struck 27 off 17 to give Australia hope. He and Maxwell put on a half-century stand to rescue Australia from 73/6,  but though Pakistan will have been worried, the asking rate always looked too high. Maxwell reached an excellent fifty but with 23 needed off the last over, both fell to Shaheen Shah Afridi, caught in the deep attempting to go big. The result meant Pakistan claimed the series, leading 2-0 with a game to play. The final match will take place on Sunday 28 November at the same location.