Eden Park, witness to best and worst of Kiwis cricket 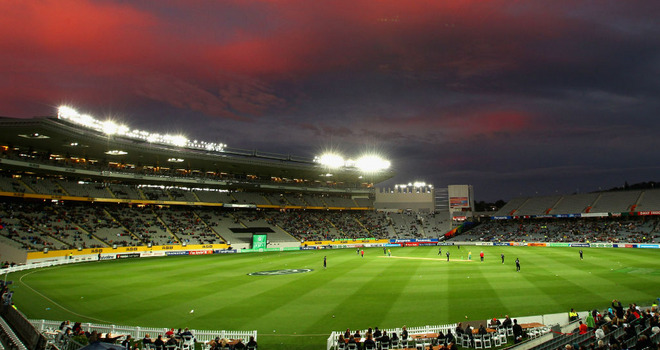 Eden Park, witness to best and worst of Kiwis cricket

AUKLAND (Reuters) - Eden Park, venue of Saturday's eagerly awaited Pool A clash between World Cup hosts Australia and New Zealand, has witnessed the best and worst of New Zealand cricket. New Zealand tumbled to their lowest test score in an innings at the Auckland ground in 1955, 26 against England. A year later the mood at the stadium was radically different when the New Zealanders finally won a test at the 45th attempt by beating West Indies. Eden Park was also where the Richard Hadlee legend was born, albeit in a losing cause against Australia. Matches against the Australians have always held an extra edge for New Zealanders, not least as a result of Australia's decision not to send their test team across the Tasman Sea for a full series until 1974. Three years later the Australians toured again. Hadlee, his country's finest cricketer, had finally made his mark on the international scene after a slow start, and at Eden Park he was on fire. Bowling with unrelenting pace and hostility, Hadlee repeatedly beat the bat without reward. For the first time the chant of "Hadlee! Hadlee!" echoed around the ground. Hadlee then struck a quickfire 50, including a six off Dennis Lillee into the number one stand, to confirm his status as New Zealand's new folk hero. Five years later one-day cricket fever gripped the country after New Zealand's heroics in the annual tournaments in Australia which followed the pact between the establishment and Kerry Packer, the Australia entrepreneur whose rebel World Series had split the game. A year after the infamous underarm match, when Greg Chappell ordered his brother Trevor to bowl the last ball of a match against New Zealand along the ground, a record 43,000 spectators poured into Eden Park to cheer their heroes and abuse the Australia captain. Chappell was roundly booed when he came on to bowl his first over. After conceding 10 runs, the boos changed to chants of "We want Chappell!". UNPRECEDENTED SUCCESS New Zealand enjoyed a decade of unprecedented success during the 1980s, winning consecutive home and away series against England and Australia. To underline their all-round ability, it was John Bracewell with his aggressive off-spin, and not Hadlee, who bowled them to victory at Eden Park in 1986 to win the return series against Allan Border's Australians. In 1992 at the last World Cup staged in Australasia, New Zealand recorded one of their most surprising and satisfying victories over the Australians following a dismal one-day series against England. Martin Crowe, combining technical purity with controlled power, batted beautifully and proved an inspirational captain after his position as team leader had initially been in doubt. Against Australia, New Zealand lost John Wright off the first ball of the tournament. The stage was set for Crowe, who produced one of his best innings in either test or one-day cricket to reach 100 not out and propel New Zealand to 248 for six, a challenging score in those days. He then produced one of a string of surprise moves in the tournament, opening the bowling with Dipak Patel's off-spin. After four overs from Chris Cairns, an assortment of medium pace and slow medium pace followed through Willie Watson, Chris Harris, Gavin Larsen and Rod Latham and Australia died a slow death, succumbing to 211 all out. New Zealand won seven games in a row but the dream was to end in a semi-final defeat to Pakistan, with Crowe off the field injured during the Pakistan run chase at Eden Park. It is still the most memorable New Zealand World Cup campaign and one that will inspire Brendon McCullum's men on Saturday.