KARACHI (92 News) – All educational institutions will remain closed on Tuesday (Today) due to the first spell of monsoon across Sindh. According to the announcement of provincial education department, all the educational institutions including government and private will be remain closed today. It was also reported that the examinations scheduled to take place on Tuesday at Karachi, NED and Federal Urdu universities have been postponed and a new date will be announced later. Ten die of electrocution as rain lashes Karachi The incessant rain which initially started with light shower as early as 6am continued until the evening, with heavy downpour later in the day inundating several parts of Karachi. A day earlier, the first monsoon spell in Karachi has exposed the administration of provincial government as daily routine of citizens has been disrupted. According to the reports, accumulation of rainwater and caused traffic congestion in various parts of the city and the rains also disrupted power supply across Karachi. 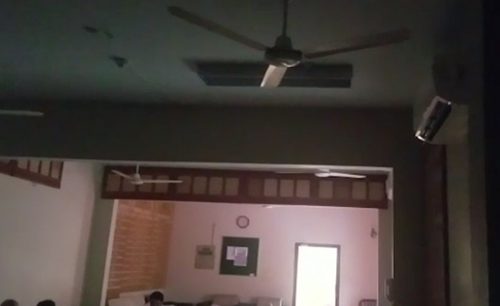 At least 10 people, including an 11-year-old girl, lost their lives due to electrocution as intermittent rain lashed the Sindh. While various parts of Karachi were hit with power outages as the metropolis and other parts of Sindh experienced incessant rain on Monday morning. Parts of the city also experienced power outages including various courts such as the Supreme Court Karachi registry, the Sindh High Court and accountability courts. This affected court proceedings resulting in most hearings being rescheduled. In a post shared on Twitter, K-Electric said that the power supply situation was normal in most areas, while supply to a few parts of Gadap, Baldia Town, Gulistan-e-Jauhar and Korangi had been affected due to heavy rainfall.

Karachi Power Update: Power supply to few parts of Gadap, Baldia, Johar, and Korangi are affected due to heavy rainfall, while power supply situation is normal in most areas. KE teams are working to restore affected areas swiftly. Inconvenience is regretted.

In view of the difficulties faced by students in commuting, the management of several private schools announced the closure of their educational institutions, while attendance at offices remained thin. All education institutions have been given an off on Tuesday due to the clogged roads. Other areas of Sindh, including Hyderabad, Sanghar, Nawabshah, Mirpurkhas and Tharparkar also received rain and thunderstorms.

On the other hand, the emergency was imposed in all the governmental hospitals in the metropolis, however, the weekly off of the doctors and para medical staffs were also cancelled. All the roads seem to be lake while the vehicles were closed due to the water. The rainwater also entered into the houses and residents are facing troubles in daily routine of life.

Pakistan Meteorological Department has also issued an urban flooding alert for cities in Sindh, and has predicted more rainfall in the next 12 to 24 hours. 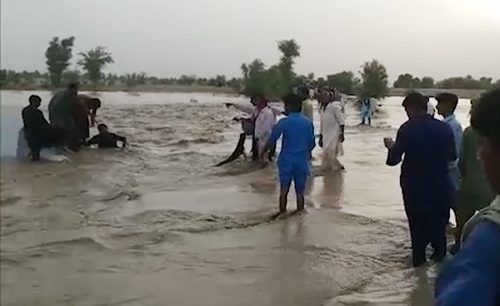 A weather advisory issued by the Pakistan Meteorological Department on July 25 had stated that widespread rains and wind-thunderstorms were expected from Sunday to Tuesday in Mirpurkhas, Thatta, Hyderabad, Karachi, Shaheed Benazirabad, Kalat and Makran divisions. In Sukkur, Larkana, Zhob, Sibbi and Naseerabad divisions, scattered rains and wind-thunderstorms with isolated moderate to heavy rainfall were expected. Additionally, isolated heavy rainfall was expected in lower Sindh (Mirpurkhas, Thatta, Hyderabad, Karachi divisions) and Kalat and Makran divisions today and tomorrow. “Heavy monsoon spell falls may generate urban flooding in Karachi, Thatta and Hyderabad divisions on Monday and Tuesday, while flash flooding [may occur] in Kalat, Sibbi, Zhob divisions during the period,” the advisory added.