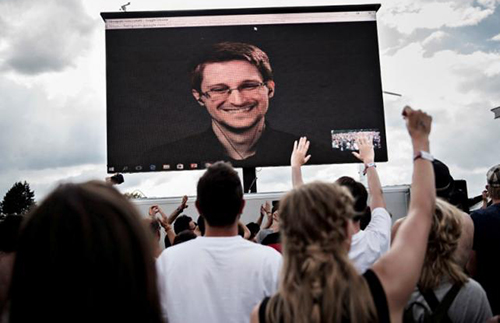 SAN DIEGO, CALIF. – When former NSA contractor-turned-whistleblower Edward Snowden met with Oscar-winning director Oliver Stone to discuss a movie on his life, he never thought he would be making his own film debut. Stone had initially interviewed Snowden to include him in DVD outtakes, Snowden said via video link late Thursday in San Diego after a screening of Stone's "Snowden," which stars Joseph Gordon-Levitt as the title character. But Snowden and Stone ended up filming nine takes for a scene in which he talks about his fears stemming from his actions. "I spoke at length just about personal values and just what it meant to me with the things that were happening since 2013," said Snowden. "I guess he liked it. People do seem to respond to that." The movie, due out in September, follows the 2013 events that led Snowden, a former contractor with the National Security Agency, to expose the US government's mass surveillance programs and flee the country after the government filed espionage charges against him. He was granted asylum in Russia later that year, and has lived there since with his girlfriend, Lindsay Mills. "When there is enough in the public record, you don't really get to decide whether or not the movie gets made," Snowden said. The film follows Snowden's discovery of the US government's mass surveillance programs that digitally monitor unaware citizens. It fictionalizes and condenses some events, such as how Snowden smuggled the data out of the NSA - dramatized with a Rubik's Cube in the film - and got it to documentary filmmaker Laura Poitras and Guardian journalist Glenn Greenwald in Hong Kong. "I admitted that I did not have a plan beyond getting straight out of there (Hong Kong), I planned to ask the world for justice and see what happened. It was kind of surprising how that worked out," he said. Asked by an audience member if he was happy, Snowden said: "I actually live a surprisingly free life," working with organizations such as the American Civil Liberties Union that Gordon-Levitt donated his "Snowden" acting fee to. "Every day, I'm working on something now that I can be proud of. I love my country, I love the things that we try to do," he said. "The fact that Lindsay ... has been with me for ten years, is still with me, that's something that just makes me happy every day." –REUTERS