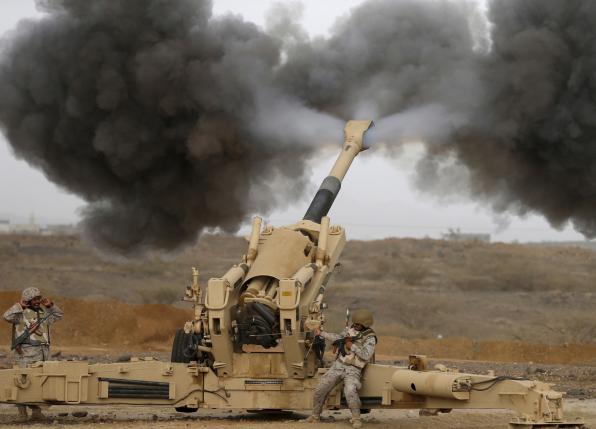 ADEN - The UN Security Council on Tuesday imposed an arms embargo targeting the Iran-allied Houthi rebels who now control most of Yemen as battles in the south of the country intensified. Egypt said it and Saudi Arabia had discussed holding a "major military maneuver" in Saudi Arabia with other Gulf states, following talks on the progress of the three-week-old Saudi-led campaign of air strikes against the Houthis in Yemen. The statement from the Egyptian presidency appeared to be a sign that members of the Sunni Arab coalition attacking the Houthis may carry through on threats to eventually follow their air campaign with a ground intervention or at least have a show of force next door. Arab states have been bombing the Houthis in support of militias resisting an advance by the group and army units loyal to ousted former president Yemen President Ali Abdullah Saleh. The conflict, though rooted in local rivalries, has become a proxy battlefield for Sunni-ruled Saudi and mainly Shi'ite Iran, the main regional powers. The UN resolution also demanded the Houthis stop fighting and withdraw from areas they have seized, including the capital Sanaa. On the ground, southern militiamen claimed gains against the Houthis on several battlefronts across southern Yemen, including districts of the port city of Aden, the last stronghold of loyalists to Saudi-backed President Abd-Rabbu Mansour Hadi. Iran meanwhile prepared to submit a four-point peace plan for Yemen to the United Nations on Wednesday, state media said. Tehran's proposal includes a call for an end to Saudi-led air strikes against the Houthis and is likely to anger Riyadh, which accuses Iran of meddling in the affairs of its southern neighbor. The Security Council on Tuesday imposed a global asset freeze and travel ban on Ahmed Saleh, the former head of Yemen's Republican Guard, and on Abdulmalik al-Houthi, a Houthi leader. Saleh's father, former president Saleh, and two other senior Houthi leaders, Abd al-Khaliq al-Huthi and Abdullah Yahya al Hakim, had been blacklisted by the Security Council in November. The Security Council also expressed concern at what it called "destabilizing actions" taken by former President Saleh, including supporting the Houthis. The elder Saleh, who was forced to step down in 2012, is widely seen as having a behind-the scenes role in the conflict in league with the Houthis. The resolution imposed an arms embargo on the five men and "those acting on their behalf or at their direction in Yemen" - effectively the Houthis and soldiers loyal to Saleh who are fighting alongside the Houthis. A statement from the Houthi leadership condemned the resolution, which it said supported "aggression". The council voted 14 in favor, while Russia abstained, saying some of its proposals for the resolution drafted by council member Jordan and Gulf Arab states were not included. "The co-sponsors refused to include the requirements insisted upon by Russia addressed to all sides to the conflict to swiftly halt fire and to begin peace talks," Russian UN Ambassador Vitaly Churkin told the council after the vote. IRAN PLAN Iranian Foreign Minister Mohammad Javad Zarif, speaking in Madrid earlier on Tuesday, said Tehran's peace initiative involved a ceasefire, humanitarian assistance, a dialogue between Yemeni factions and a broad-based government. "This issue should be resolved by the Yemenis. Iran and Saudi Arabia need to talk but we cannot talk to determine the future of Yemen," he told a news conference. The Houthis, northern-based Shi'ite Muslims, seized control of Sanaa in September, confining Hadi to his presidential residence. He fled to Aden in February then escaped to Riyadh last month as Houthi forces closed in on the city. Saudi Arabia and other powers accuse Iran of arming the Houthis and interfering in Yemeni affairs. Tehran denies giving military support to the Houthis. Riyadh says it is protecting Hadi and his government-in-exile from the Houthis. But as the world' largest oil exporter, Saudi Arabia is also unhappy at the prospect of protracted upheaval in its southern neighbor. Nearby shipping lanes and the narrow Bab el-Mandeb passage, through which nearly 4 million barrels of oil are shipped daily to Europe, the United States and Asia, could also be at risk from the fighting. QAEDA LEADER KILLED Al Qaeda, which has staged suicide bombings against the Houthis, also poses a threat to Yemen's stability. The United States has poured aid and personnel into the country in recent years as part of its war on Islamist militants, but its military teams evacuated last month amid the worsening civil war. Al Qaeda in Yemen announced on Tuesday that its spiritual leader was killed by a US air strike, according to a statement distributed by the group online. Ibrahim al-Rubaish was a Saudi national released from the Guantanamo Bay prison camp in 2006. His death may be a sign that a covert US drone program against Yemen's branch of the global militant group continues despite the American military withdrawal. Separately, al Qaeda said it killed fifteen soldiers fleeing homeward from a military base near Balhaf in the east of the country. A local official told Reuters the men were captured and stabbed to death outside the nearby city of Ataq. Southern militia sources said they wrested control of the army base loyal to the Houthis after heavy fighting on Monday night near the Balhaf liquefied natural gas (LNG) plant, in southern Shabwa province on the Arabian Sea. Yemen LNG, the company managing the facility, said it had halted production due to insecurity and was evacuating staff. The plant was intact and its surrounding area secure, it said. After prolonged street fighting in the southern city of Aden, Houthi fighters withdrew on Tuesday from Aden's Khor Maksar district, where the international airport and foreign missions are located. The pull-out deprives the Houthis of a bridge to downtown areas where they face heavy resistance from local fighters. - Reuters