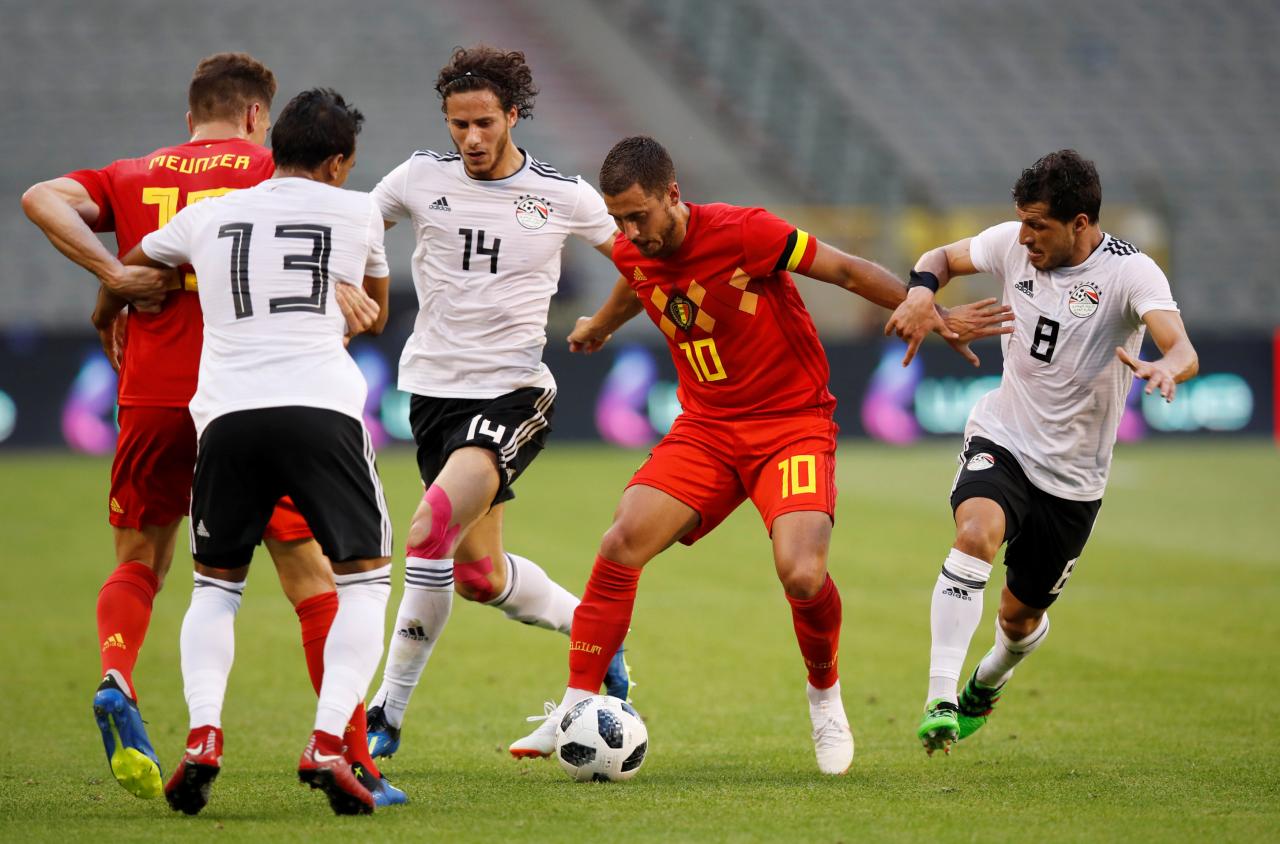 CAPE TOWN (Reuters) - Egypt and Nigeria continued their recent poor form in World Cup warm-up games  ahead of their bids to become the first African side to reach the semi-finals of the global showpiece event. Belgium eased past Egypt 3-0 in Brussels to extend the north African side’s winless streak since qualifying for the tournament in Russia starting next week. Eden Hazard provided the sparkle as Belgium dominated. The Chelsea forward set up Romelu Lukalu for the first goal and netted the second himself before halftime. Marouane Fellaini added a third in stoppage-time to complete a strong performance by the hosts, who underlined their status as one of the favourites in Russia. Egypt were missing injured forward Mohamed Salah but their coach Hector Cuper said his talisman might be fit for the opening Group A game against Uruguay on June 15. Nigeria turned in a disappointing performance in their final tune-up, losing 1-0 to the Czech Republic who failed to qualify for the World Cup. Tomas Kalas gave the Czechs a deserved lead in the 25th minute in Schwechat, near the Austrian capital of Vienna, after he fired home a rebound following a corner to beat sprawling Nigerian goalkeeper Francis Uzoho. Nigeria, who have lost three of their last four games and drawn the other, kick off their World Cup campaign against Croatia on June 16, but they looked disinterested during the opening half as the Czechs dominated. The Nigerians stepped up the pace in the second half – briefly interrupted by a rain delay – and created a few chances but could not find the net against a Czech side who conceded four goals against Australia last week. Also playing on Wednesday were Panama, whose preparations ended on a low note as they slumped to a 1-0 defeat by Norway after an early goal by Joshua King.

Worryingly for the Panamanians, who face Belgium, England and Tunisia in Group G in their first World Cup finals appearance, they struggled to deal with Norway’s physical power, but they did create decent chances in the second half. Earlier on Wednesday, Israel demanded that FIFA investigate what it said were threats against Argentina players that forced them to cancel a match in Jerusalem, including Palestinian calls to burn replica shirts of Lionel Messi if he played. But Palestinian football officials praised World Cup-bound Argentina and their captain Messi for calling off the friendly, which Israel had moved to Jerusalem from the coastal city of Haifa. “The Israelis tried to use Messi and those stars from Argentina, and I would like to thank them and appreciate their decision,” Palestinian Football Association President Jibril Rajoub told a news conference in the West Bank city of Ramallah. Israeli Sports Minister Miri Regev, who pushed for the game to be moved from Haifa to Jerusalem, dismissed accusations that her demand had caused its cancellation and said Messi, his team mates and his family had been threatened by “terror elements”.