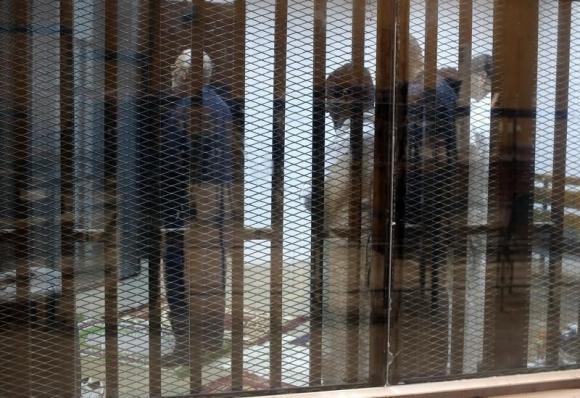 CAIRO - An Egyptian disciplinary court ordered 41 judges into compulsory retirement on Saturday for supporting the outlawed Muslim Brotherhood, judicial sources said, the latest move in a sweeping crackdown on political dissent. The government has implemented a harsh crackdown on Islamists as well as secular political opponents since then army chief Abdel Fattah al-Sisi ousted Islamist President Mohamed Mursi in July 2013 following mass protests against his rule. The Disciplinary Council headed by judge Nabil Zaki did not immediately release the reason for its decision, but the judicial sources said 31 of the judges were sent into compulsory retirement for signing a statement that condemned the removal of Mursi. Another 10 were removed from their posts for joining "Judges for Egypt" group which used to be supportive of the Brotherhood even before Mursi's removal, the sources added. Egyptian law prohibits judges from engaging in politics, but critics and human rights groups say the judicial disciplinary court has turned a blind eye to judges who openly support the government of Sisi, who was elected president last year. The government says the judiciary is independent and it never intervenes in its work. "The decision is shocking and it is a massacre of the judges," Ahmed El-Khatib, one of the punished judges told Reuters. He made no comment about whether he supported the Brotherhood. The judges have the right to appeal against the decision. Separately, security forces arrested 63 middle-level Brotherhood leaders who face charges of attacking police headquarters and inciting violence, the Interior Ministry said in a statement on Saturday. Another 13 Brotherhood supporters were arrested on suspicion of possessing arms and ammunition, it added. The government has banned the Brotherhood as a terrorist organization, and Sisi says it is a threat to national security. The group says it is committed to peaceful activism. Egyptian security forces face a militant insurgency that has killed hundreds of soldiers and police since Mursi was ousted. The attacks are mostly concentrated in North Sinai, center of an insurgency by militants seeking to topple the government. But frequent small-scale attacks in Cairo and other regions have damaged Egypt's efforts to project an image of stability after four years of turmoil triggered by the 2011 uprising that deposed veteran ruler Hosni Mubarak. A homemade bomb wounded four people outside an HSBC bank branch east of the costal city of Alexandria on Saturday, security sources said. The attack came on the second day of an investment conference in the resort of Sharm el-Sheikh, that Egypt hopes will project an image of stability and attract billions of dollars. - Reuters