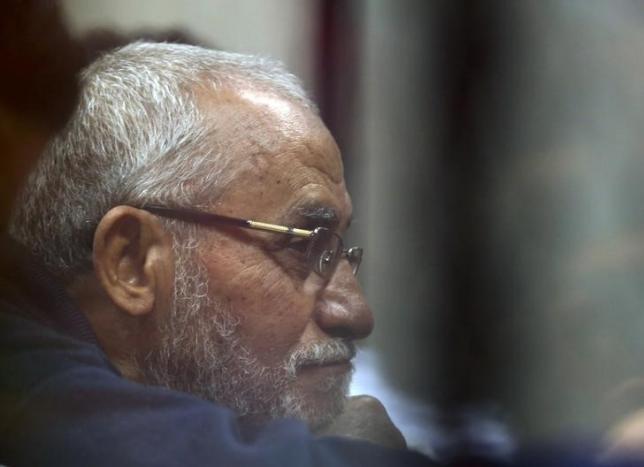 CAIRO - An Egyptian court sentenced Mohamed Badie, leader of the outlawed Muslim Brotherhood, and 13 other senior members of the group to death for inciting chaos and violence, and gave a life term to a US-Egyptian citizen for ties to the Brotherhood. The men were among thousands of people detained after freely elected Islamist president Mohamed Mursi was toppled in 2013 by the military under Abdel Fattah al-Sisi, who is now president. Sisi describes the Brotherhood as a major security threat. The group says it is committed to peaceful activism and had nothing to do with Islamist militant violence in Egypt since Mursi's fall following mass protests against his rule. Egypt's mass trials of Brotherhood members and people accused of links to the group, as well as its tough crackdown on Islamist and liberal opposition alike, have drawn international criticism of its judicial system and human rights record. The sentences, pronounced at a televised court session on Saturday, can be appealed before Egypt's highest civilian court in a process that could take years to reach a final verdict. U.S.-Egyptian citizen Mohamed Soltan was sentenced to life in jail for supporting the veteran Islamist movement and transmitting false news. He is the son of Brotherhood preacher Salah Soltan, who was among those sentenced to death. The White House condemned the sentencing, calling for Soltan's immediate release and citing concerns for his health. It added that he would continue to receive U.S. diplomatic support "until he can return safely to the United States." Mohamed Abdel-Mawgod, one of the defence lawyers, also condemned the verdicts. "The court did not differentiate between the defendants and put them all in the same basket," he told reporters at the courthouse. None of the defendants were present during the hearing. Badie is the Brotherhood's General Guide and has already been sentenced to several death and life sentences. His deputy Khairat El-Shater was given a life sentence on Saturday. "OPERATIONS ROOM" TRIAL Rights groups say Egypt, where a popular uprising toppled veteran autocrat Hosni Mubarak in 2011 and started years of political turmoil, is now cracking down on all dissent. Sisi says stability is needed to revive the shattered economy. Rights advocates have criticised a U.S. decision to end a freeze on military aid to Cairo, saying Washington is putting human rights on the back burner. The United States has said the decision to end the freeze was in the interest of national security. [ID:nL2N0WX2X7] Mohamed Soltan, 27, arrested in August 2013, had been on hunger strike while in prison. "He deserves the punishment because of the money and instructions from the Brotherhood which were found with him, and for spreading chaos and horror in society," presiding Judge Mohamed Nagi Shehata told reporters. Sara Mohamed, a relative of the Soltan family, said they would appeal the verdict. "It was a farce trial of the first class ... None of the defendants attended the session," she told Reuters by phone. A website calling for Mohamed Soltan's release says he was not a member of the Brotherhood, describing him as a U.S.-educated peace activist who was involved in youth events and charities. The website shows pictures of him lying emaciated on a stretcher while in detention. Saturday's case was known in local media as "The Rabaa Operations Room" trial. This is in reference to a sit-in at Rabaa square in 2013 in which hundreds of people protesting at the overthrow of Mursi were killed when security forces tried to clear the area by force. Cairo has defended its actions, saying it had given protesters the opportunity to leave peacefully and that armed elements within the Brotherhood initiated the violence. Saturday's session sentenced 51 people. Those who were not sentenced to death were given a life sentence. The long list of charges included leading and funding an outlawed group, overturning the constitution and planning to spread chaos, a court source said. - Reuters