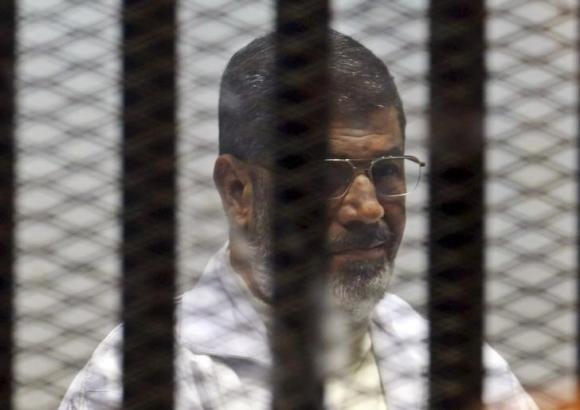 (Reuters) - An Egyptian court put ousted Islamist president Mohamed Mursi on trial on Sunday on charges of endangering national security by leaking state secrets and sensitive documents to Qatar, furthering a state crackdown on his outlawed Muslim Brotherhood. Mursi, who was toppled by the army in 2013 after mass protests against his rule, remained defiant, insisting he was Egypt's legitimate president despite facing several court cases. "This court does not represent anything to me," said Mursi, who was on trial with 10 other people. The maximum penalty if convicted is death. Relations between Qatar, a Gulf Arab state, and Egypt have been icy since July 2013, when Egypt's then-army chief Abdel Fattah al-Sisi overthrew Mursi and then launched a tough security crackdown against Islamists. Qatar had supported Mursi, who is already in jail along with thousands of Brotherhood members, many of whom have been sentenced to death on separate charges. The public prosecutor had said Mursi's aides were involved in leaking to Qatari intelligence, documents which exposed the location of and weapons held by the Egyptian armed forces and detailed the country's foreign and domestic policies.