In Egypt's impoverished south, Sisi is voters' only choice 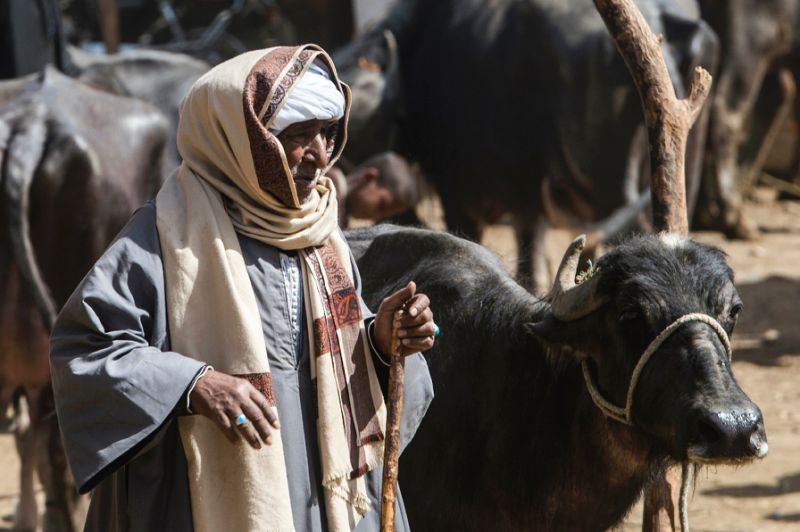 In Egypt's impoverished south, Sisi is voters' only choice

CAIRO (AFP) - In the Egyptian village of Abu Shosha, far south of Cairo, residents hit hard by economic hardships are planning to vote for President Abdel Fattah al-Sisi in elections starting on Monday.

"We only began to feel safe after Sisi" became president and boosted security, said Tarek Mohamed Hafez, a cattle trader in his 40s.

Dressed in a striped traditional galabeya gown, he was selling cows at the weekly cattle market in the village, in Qena province 650 kilometres (400 miles) south of the capital.

"We didn't have any kind of security," he said, standing amid makeshift shelters held up by wooden sticks to provide shade. "Women couldn't even move to go to a doctor."

Hafez was talking about the period between the January 2011 uprising that toppled longtime ruler Hosni Mubarak and Sisi taking office in 2014.

The former defence minister and army chief was elected a year after ousting president Mohamed Morsi following mass protests against the Islamist, elected in 2012 in the first vote following Mubarak's ouster.

Sisi is seeking re-election virtually unopposed in a March 26-28 poll. His only opponent is Moussa Mostafa Moussa, a Sisi supporter. All other presidential hopefuls were arrested or withdrew from the race.

"No one will do except for Sisi," Hafez said. "You see countries around us have collapsed." But he appealed to the president for more investment in the health sector. "Hospitals here are falling apart," he said. His support for Sisi was echoed by others in the village, both poor and rich.

They included Hussein Hafez, a retired senior official at the education ministry. "We don't even know the other candidate, and he (Moussa) himself said he would vote for Sisi," said Hafez, sitting on a wooden bench in front of his house on the Nile.

Moussa joined the race shortly before the application period closed, meaning Sisi would not stand unchallenged in the election. While they say they support Sisi for his record on improving security, many speak of economic hardships.

Egypt's economy has been hard hit by sweeping reforms put in place under a $12 billion (10 billion euro) loan deal with the International Monetary Fund.

The pound has also lost more than half its value since the authorities floated the currency in November 2016. "The harvest from one feddan (around one acre) of lettuce used to be sold for 10,000 pounds and now is sold for 3,000 pounds," Beksamos said. That is a fall from over $1,100 to around $170.

Not enough to eat

"Sisi is a good man and everything he did was good, but the rising prices are terrible and I'm asking if he can make things more affordable, because workers don't have enough to eat," Beksamos said.

About 28 percent of Egypt's 96 million inhabitants live under the poverty line. Official poverty rates surpass 50 percent in some parts of the south.

About 70 kilometres north of Abu Shosha, in the capital of Sohag province, banners supporting Sisi were far rarer than in Cairo -- but those supporting Moussa, if they existed, were not prominently displayed.

Many in Sohag city vocally support Sisi. Maher Beshai, 66, who sells spare parts for bicycles, said he is ready to vote for him "for one, two, three, and four terms, as we want to build our nation."

But some in the city were less enthusiastic. "I was only hoping to choose from several candidates, not for the two choices to be either Abdel Fattah or al-Sisi," said a pharmacy worker who refused to have his name published out of concern for his safety.

Othman, a 21-year old brick factory worker, said he was not interested in the election. "I have my work and I support my siblings and my wife," he said. "I don't know how the country is run, so why would I vote, and what would my opinion add?"