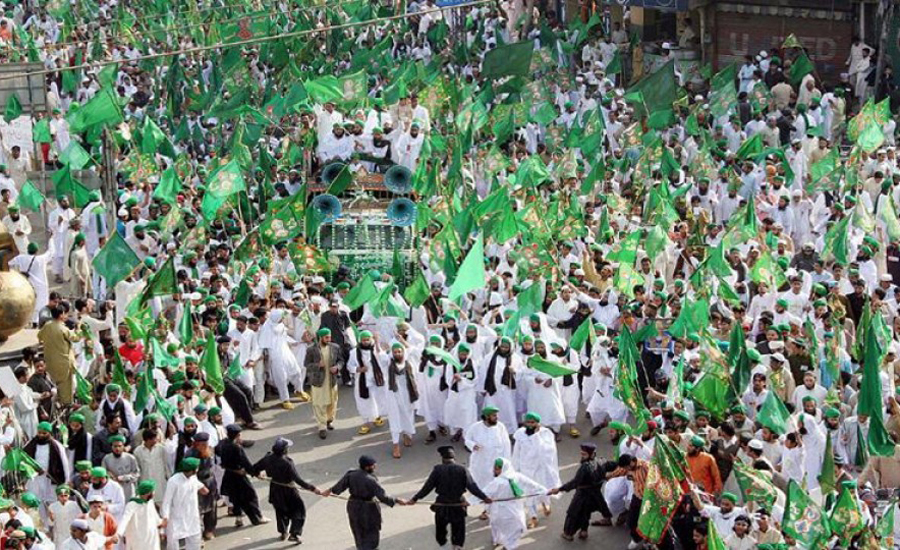 LAHORE/ISLAMABAD/KARACHI (92 News) – Eid Milad-un-Nabi (PBUH) was celebrated with religious zeal and fervor across the country. The day dawned with 31-gun salute in the federal capital and 21-gun salute in all the provincial capitals to pay homage to Prophet Muhammad (PBUH). Special prayers were offered in the mosques after Fajr prayers for peace, prosperity and development of the country. Special conferences, events and “Mahafil-e-Naat” were arranged to pay respect to the Holy Prophet (PBUH). Mosques, buildings, markets, streets and homes were decorated and illuminated with colorful lights and buntings. People decorated and illuminated their houses and streets, besides bazaars with lights and green flags to show their respect and love with the Holy Prophet Muhammad (PBUH). Banners and billboards were displayed to celebrate the day. The authorities had made foolproof security arrangements for the day. Security personnel were deployed around mosques, imambargahs and along the routes of processions. On the other hand, in his message on the occasion of Eid Miladul Nabi, President Mamnoon Hussain stressed the need for following the teachings of Holy Prophet (PBUH) and promote his Uswah Hussana for the well-being of the humanity. He said: "We as the followers of the Holy Prophet Hazrat Muhammad (PBUH) should ensure peace and stability in the country obeying his teachings as his life is a complete example for us." In his message, Prime Minister Shahid Khaqan Abbasi congratulated the entire nation on the occasion of Eid Miladun Nabi (PBUH) and urged the need for following the path of Holy Prophet Muhammad (PBUH) to create an environment of love, peace and harmony in the country. He said the best way to celebrate this blessed day is an affirmation from ourselves to prove before the world with our character, way of talking and acts that we are the Umah of Hazrat Muhammad (PBUH). He also paid tribute to all martyrs, ghazis and mujahideen who offered great sacrifices for the defence of the motherland.