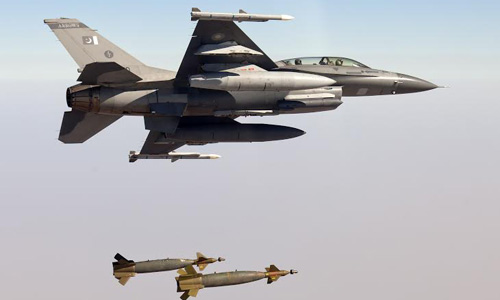 KHYBER AGENCY (92 News) – As many as 30 terrorists, including a key commander of the banned Lashkar-e-Islam, were killed in strikes by the Pakistan Air Force jets in Tirah Valley of Khyber Agency on Wednesday. According to a press release issued by the ISPR, PAF gunship helicopters and jets targeted 13 hideouts on intelligence reports. It said that Lashkar-e-Islam commander Salahuddin was among the terrorists killed in the strikes. The release said that two weapons and gunpowder caches were destroyed.