Eleven in a row Chelsea are kings of the Palace 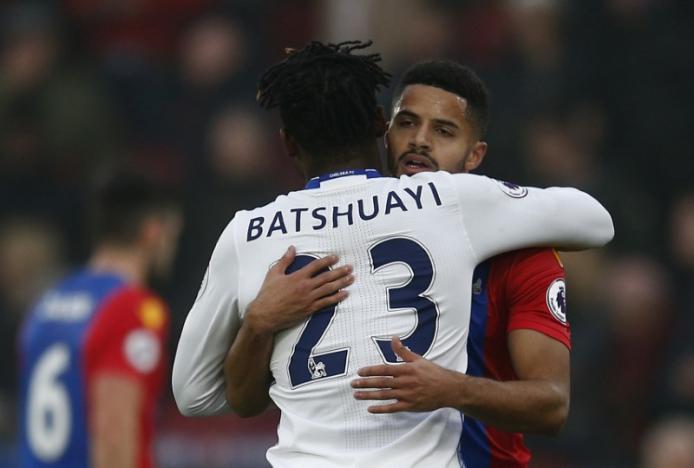 Eleven in a row Chelsea are kings of the Palace

LONDON - Leaders Chelsea tightened their stranglehold on the Premier League after a 1-0 win at Crystal Palace earned them an 11th consecutive victory and sent them nine points clear. Yet another Diego Costa goal meant Antonio Conte's unstoppable side remained firmly on course for the title despite the fog enveloping Selhurst Park in the day's early kickoff. Zlatan Ibrahimovic was again at his irrespressible best, scoring both of resurgent Manchester United's goals in a 2-0 victory at West Bromwich Albion. Champions Leicester City had striker Jamie Vardy sent off as they trailed 2-0 at Stoke City before battling back to draw 2-2, Daniel Amartey scoring a late equaliser. Sunderland finally began to see some daylight at the bottom as a 1-0 home win over Watford edged them off the foot of the table, ahead of Swansea City and Hull City who both lost. Chelsea have triumphed in 14 of their opening 17 league matches under Conte, a feat never achieved before by a manager new to England's top flight. They have also won 11 in a row in a single season for the first time as the Italian continues to try and eclipse the kind of domination Jose Mourinho enjoyed in his first stint at Stamford Bridge from 2004-07. Chelsea have 43 points, nine clear of Liverpool, who visit neighbours Everton on Monday, and Arsenal, who travel to fourth-placed Manchester City (33 points) on Sunday. "If I don't say I am pleased for this record I am dishonest. I am not a person who loves stats but it's my first season in England and to win 14 games out of 17 is fantastic," former Juventus and Italy coach Conte told a news conference. "I like to see the present but I look more to see the future and I want the future to be special for us. The only way for this is to work. "We have room to improve. We are working on our principles. This season I've tried to play with different formations. Now we've found a good balance offensively and defensively." Palace could find no chink in Chelsea's armour even though the visitors were not particularly threatening in the first half when they rarely threatened Wayne Hennessey's goal. RUTHLESSLY EFFICIENT Conte's men have become ruthlessly efficient though. Costa only needed one chance to score, climbing to head Cesar Azpilicueta's inviting cross into the corner of the net two minutes before the interval. It proved sufficient as Palace made little impact after the break despite plenty of huff and puff. "I have to say that was as good a defensive display as you'll see," Palace manager Alan Pardew said. "We couldn't find a way through, even on set plays which we're strong at." At the Hawthorns, Ibrahimovic took his season's tally to 16 goals in all competitions, including 10 in the last nine matches, as Manchester United made light work of a usually stubborn West Brom team. It led to another salute to his Swedish superstar from a grateful manager. "It is a pleasure to see him play, his happiness. It's fantastic for a 35-year-old guy," said Jose Mourinho. Perhaps man of the match Ibrahimovic, though, gave away his secret in a pre-match interview, saying he felt as sprightly as a 20-year-old. A fourth successive win for the first time since the start of Mourinho's reign in August saw United join fifth-placed Tottenham Hotspur on 30 points. Leicester salvaged only their second away point of the season in strange circumstances. Vardy saw red for a 28th-minute lunge on Mame Biram Diouf before a Bojan penalty and Joe Allen tap-in put Stoke 2-0 up. Leonardo Ulloa's header halved the deficit after the break before Amartey's late leveller. Patrick van Aanholt's goal proved decisive for Sunderland as they climbed above Swansea, beaten 3-0 at Middlesbrough, and Hull who struck the woodwork three times before losing 1-0 to a Mark Noble penalty at West Ham United. -Reuters