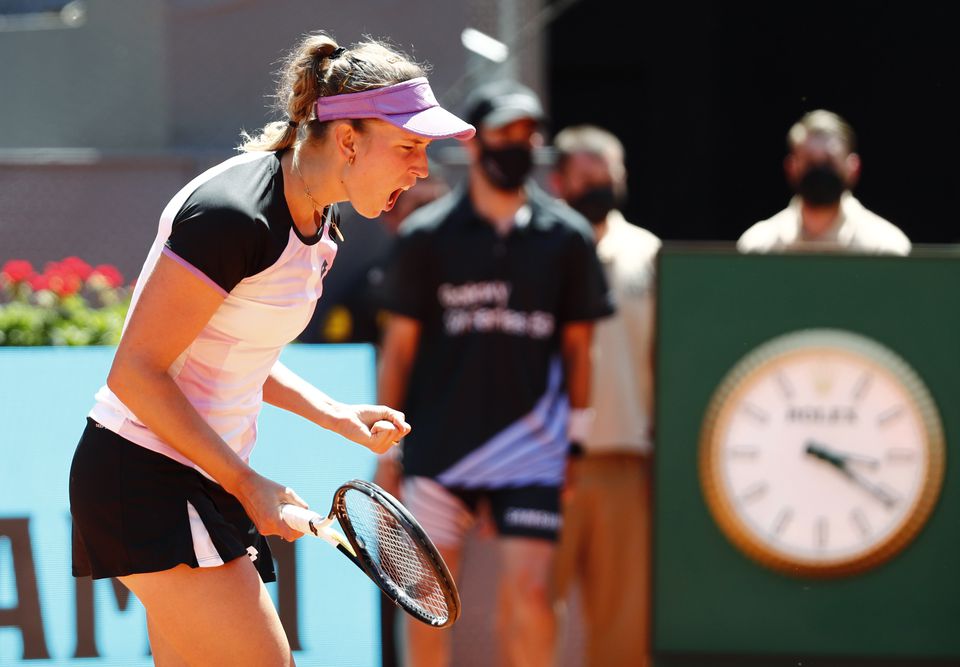 MADRID, Spain (Reuters) – No. 13 seed Elise Mertens rallied from a break down in each of the final two sets to eliminate No. 3 seed Simona Halep 4-6, 7-5, 7-5 and advance to the quarterfinals of the Mutua Madrid Open on Tuesday.

Mertens, of Belgium, needed two hours and 34 minutes to defeat the Romanian on the clay courts of Spain. It was Mertens' second win in six attempts against Halep and her first on clay.

It was the sixth win for Mertens over an opponent ranked in the top five. Halep, a two-time Grand Slam champion, is ranked No. 3 in the world.

But it wasn't easy as Mertens had to climb back from a 3-1 deficit in both the second and third sets.

"I want to be on court as long as possible, especially after losing the first set," Mertens said. "I didn't think too much about the score, I was just thinking about the way I should play to improve myself."

Halep had her chances to put away Mertens, but 48 unforced errors contributed to her defeat.

"She played really well, and she definitely deserved to win because she was stronger in the end," Halep said of Mertens. "I cannot say I played bad, but I did some mistakes, important mistakes. Sometimes it's just a little bit and the match is going away."

In the quarterfinals, Mertens will meet her doubles partner, Aryna Sabalenka of Belarus, who needed just 52 minutes to defeat American Jessica Pegula 6-1, 6-2. It will be the first quarterfinals appearance in Madrid for both Mertens and Sabalenka.

Sabalenka, the No. 5 seed, had just 13 unforced errors and faced only one break point against Pegula.

In other action, a pair of seeded players were eliminated by two unseeded Russians, Anastasia Pavlyuchenkova and Karolina Muchova, in three-set clashes.

Pavlyuchenkova and Muchova will meet Wednesday in another quarterfinal.

Second-seeded Rebecca Peterson of Sweden was pushed to the limits by Xiyu Wang of China before winning 4-6, 6-4, 7-5 in a second-round match at Saint-Malo, France.

Wang hit five aces and converted six break opportunities but she couldn't close out in the third set as Peterson broke her serve four times.

Other winners were No. 4 seed Tamara Zidansek of Slovenia, No. 6 Arantxa Rus of the Netherlands and No. 7 Nina Stojanovic of Serbia. Viktoriya Tomova of Bulgaria upset American Christina McHale, the No. 8 seed.