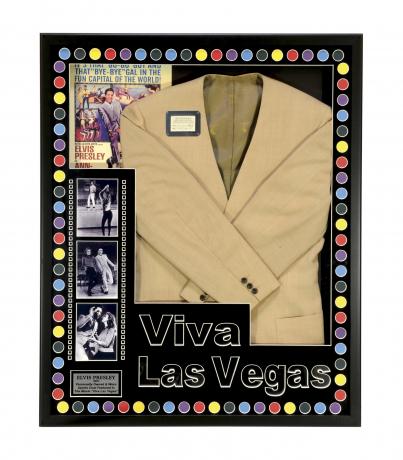 NASHVILLE - An auction at Elvis Presley's Graceland mansion showed the King of Rock 'n' Roll remains as popular in death as he was in life. About 150 bidders attended and thousands more participated online in the auction, which ended late on Thursday and generated nearly $1 million. They bid on 160 items belonging to the late singer, including a gold-and-diamond necklace with the letters "TCB" - meaning "taking care of business" - that was a gift from fellow Las Vegas entertainer Sammy Davis Jr. The necklace fetched $40,000, well above the pre-sale estimated value of $20,000 to $30,000, while a racquetball shirt Presley wore to play on his private court sold for $32,500, easily topping the estimated value of $4,000 to $6,000. Also selling for $32,500 was a 1960s jacket and leather pants ensemble that was estimated before the auction to be worth up to $8,000. "There were some nice surprises ... and we were thrilled," Jeff Marren, consignment director for Graceland Auctions, said on Friday. Those who attended paid $20 to bid on items spanning Presley's career on screen and stage. The auction was part of the festivities in Memphis for Elvis Week, which annually brings thousands of fans to the city to celebrate the life of Presley, who died Aug. 16, 1977, in his bathroom inside the mansion. All the auction items were from third-party collectors and not from Graceland archives, the auctioneers said. Many items in the auction sold for more than their estimated value, said Marren, who added that the next auction will be held in January during Presley's birthday celebration. Not everything in the auction met expectations. Presley's bone-colored, three-button, no-lapel jacket from a dance scene with actress Ann-Margret in the movie “Viva Las Vegas” was estimated to be worth $30,000 to $50,000, but did not sell after failing to attract a high enough offer. - REUTERS